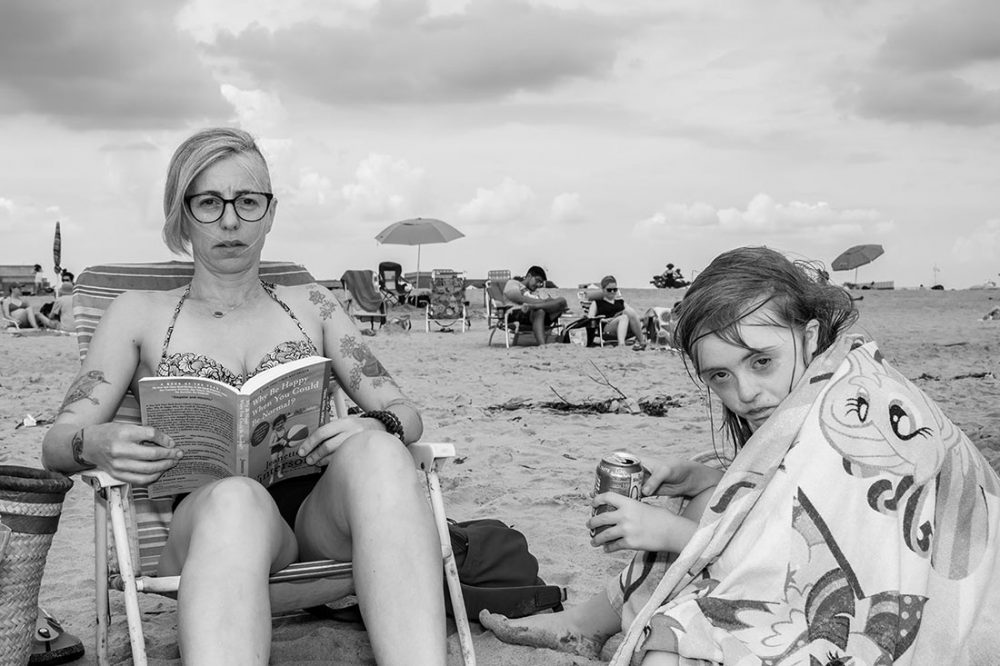 /ʁə.ɡaʁ/ verb 1. To consider or think of (someone or something) in a specified way.

When my daughter was born, I was told that she had the “physical markers” for Down syndrome. A few days later, the diagnosis of trisomy 21 was confirmed with a simple blood test. Today, sixteen years later, Luigia is a lively teenager, yet these “markers” have grown with her, and her disability remains visible to the outside world.
As we try to go about our ordinary lives in our community–getting ice cream after school, going grocery shopping or walking to the local library–I often catch people staring, gawking, or side-glancing at her, at us. Even though their gaze feels invasive, I perceive it as more questioning than judging, at least most of the time.
With this on-going series REGARD, I am opening a window into our reality. To emphasize control over my message, these everyday scenes are meticulously set, lit up; they are staged and posed. The performers are my daughter and I. The portraits are purposefully developed in black and white, for by refusing the decorative and emotionally evocative element of color, I aim to maintain a distance between us and them. The composition of the photographs expresses routine, domestic acts in which I address the viewers directly: look at us bathing; look at us grooming; here we are at bedtime; this is us on a random day at the beach. In each scene, the viewers are plunged into the outside perspective. At first glance, it may seem that I am offering us as vulnerable prey to their judgement, yet in fact I am guarding our lives, and the viewers are caught gawking–my direct gaze at the camera.
My series is very basic in its concept: it shows a child, it shows a mother, it shows them living at home, performing familial acts. Because I believe in the connective power offered by the depiction of domesticity, I hope that REGARD helps the audience rethink some of their assumptions about people living with disabilities and with this, I hope my series finds a humble spot within the movement that helps people with disabilities gain visibility. 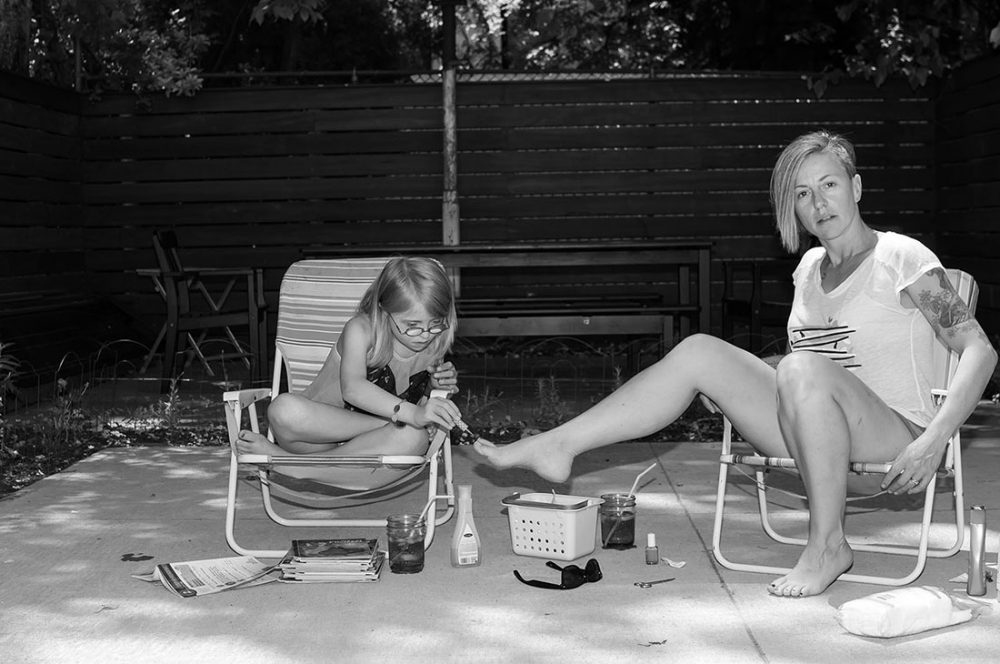 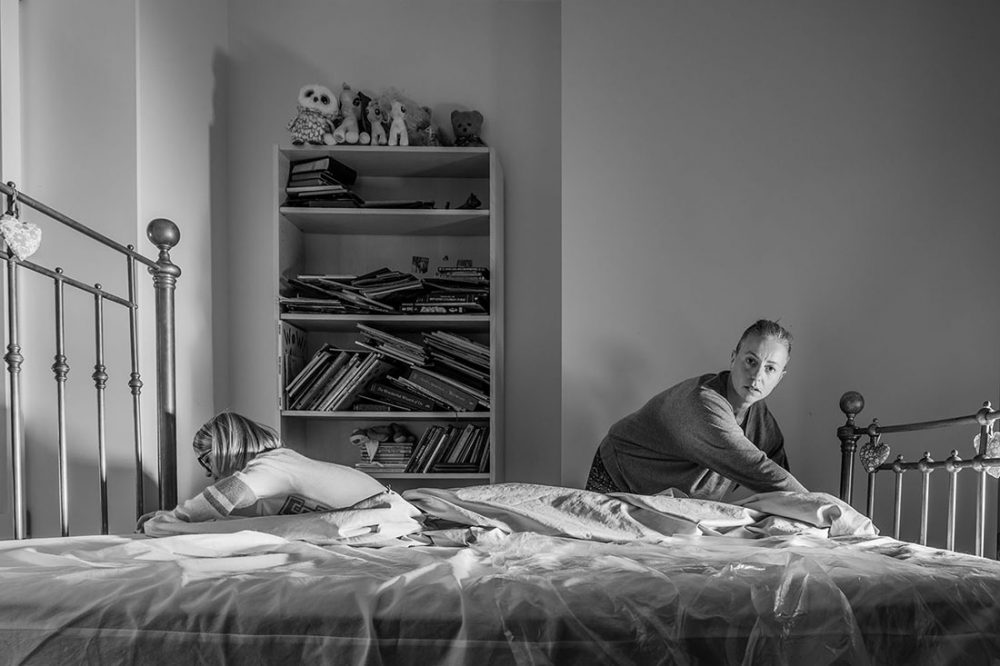 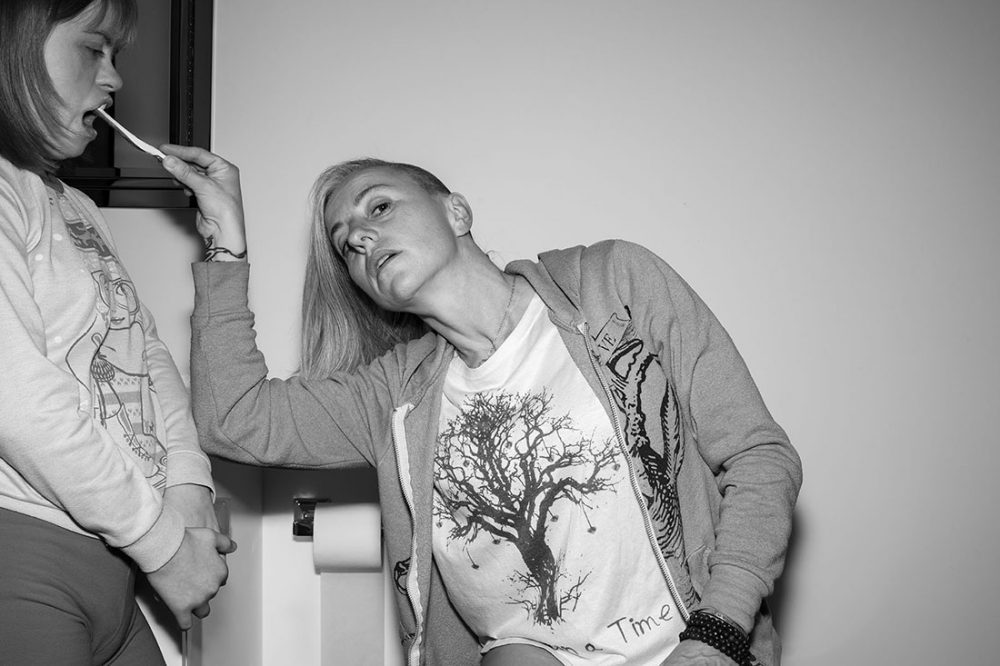 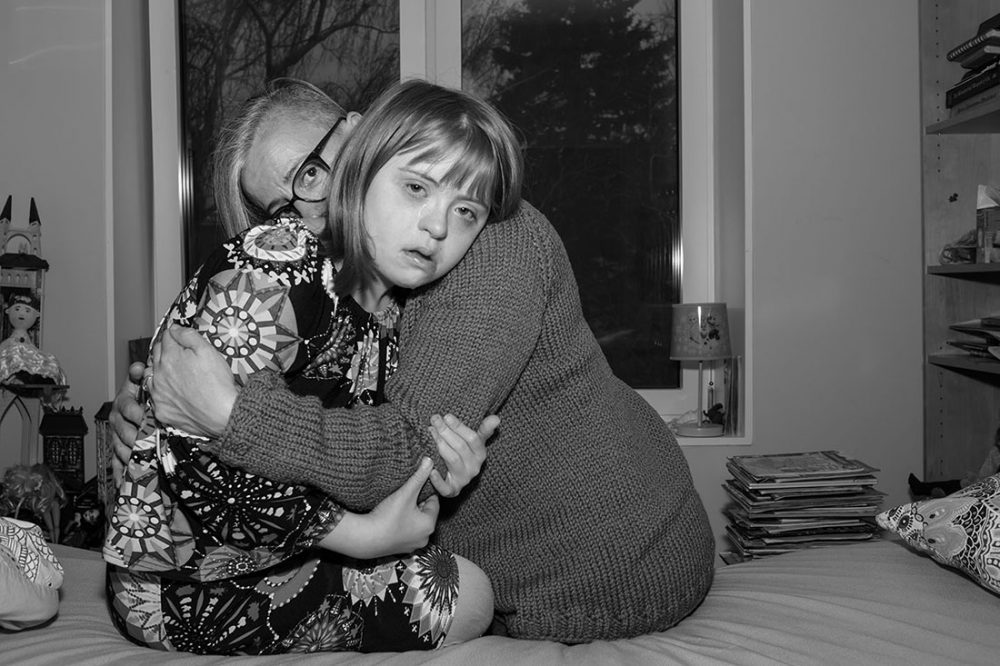 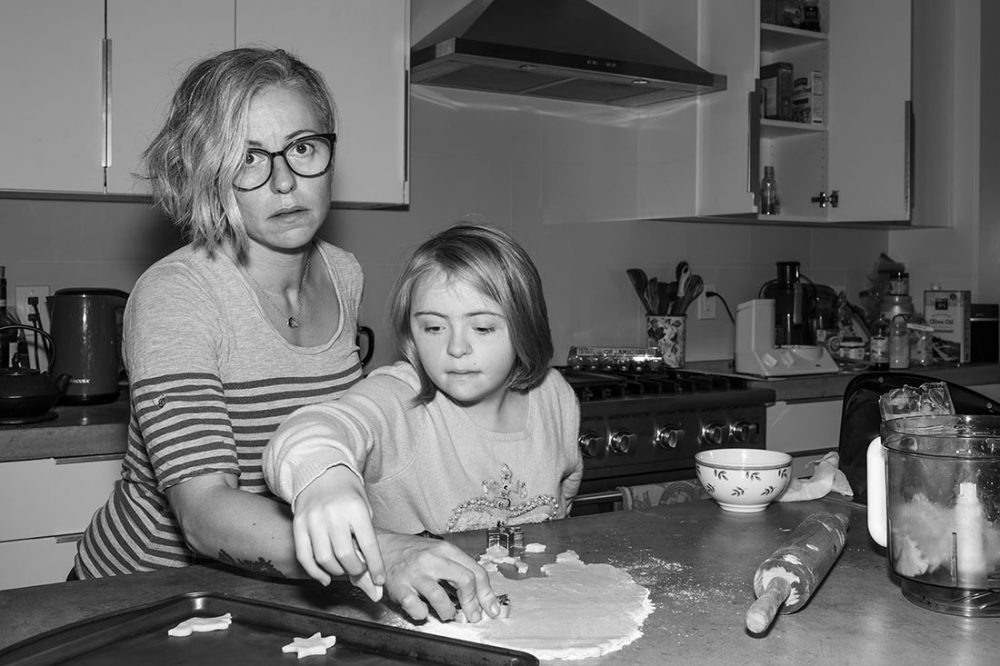 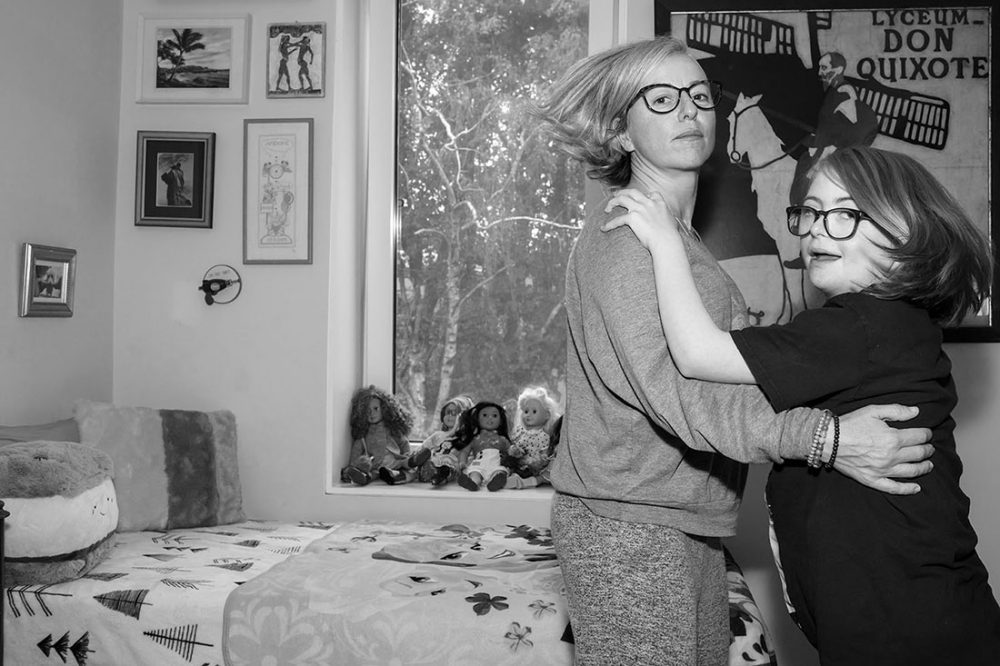 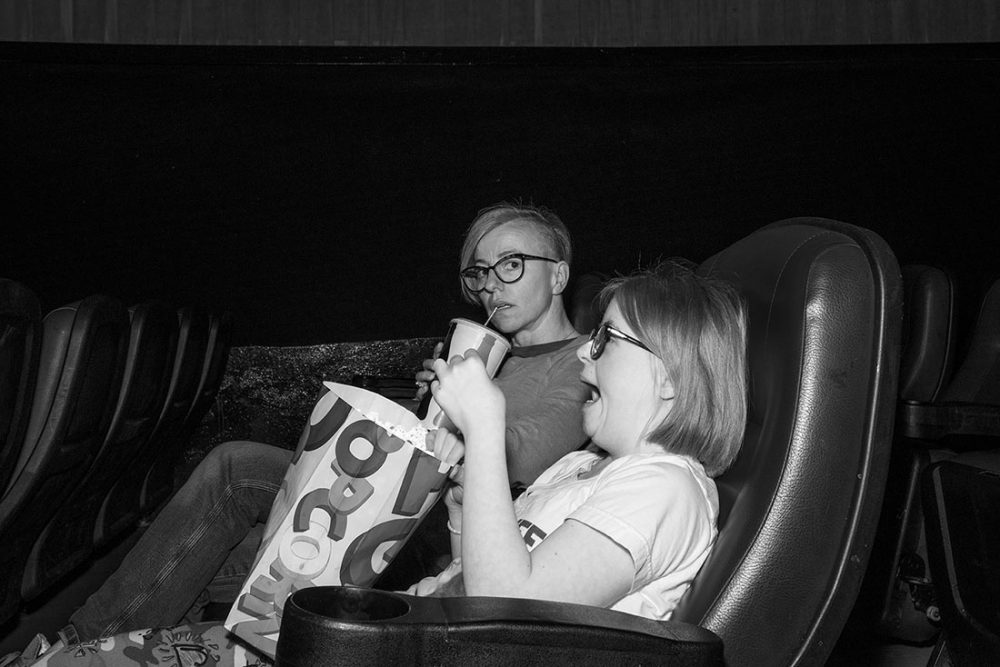 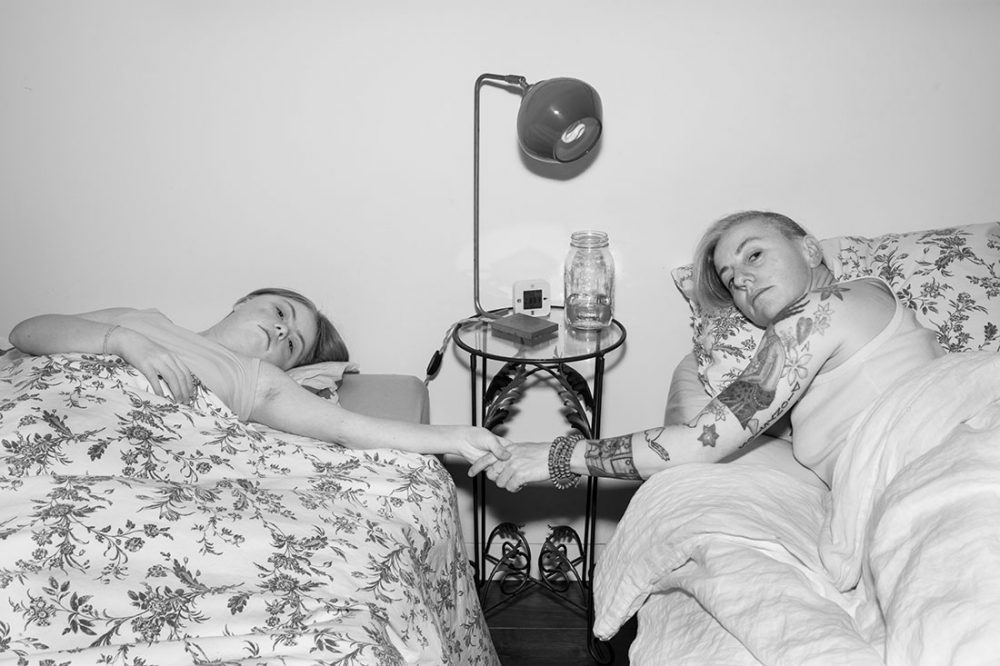 Anna Grevenitis (b.1974 Colmar, France) Anna Grevenitis came to photography late. Her formative years were filled with the study and teaching of the English language and literature, but when her daughter was born–and a year later her son–she naturally morphed into a full-time mother and caretaker. As such child rearing took over and was so physically and mentally demanding that she only realized when her children turned 3 and 4 that she had experienced a profound loss of self in the process. There was a void and photography came to her as the evident instrument to express it. Except for a few basic classes that got her started, she has been teaching herself the medium.
Photography was therapeutic and based in self-inquiry, so she effortlessly pointed her lens at her family and herself. In her daily introspection, she searches for meaning with her camera. Anna Grevenitis is interested in photography as an act of establishing visual memory and engaging in social visibility, over time. Long term works have chronicled memories of her daughter and son, of people and places in her life, of herself. Documenting transformation is the focus of her process.