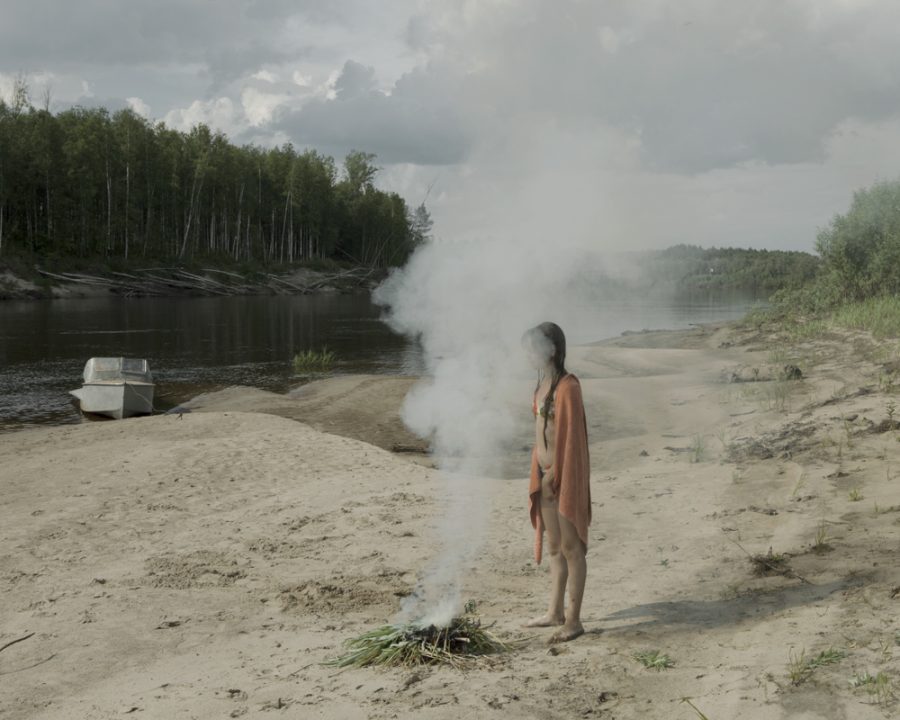 KET RIVER, Russia - July 06, 2016. Ksenia stands in smoke to escape swarms of mosquitoes after a swim. Her family left the regional capital of Tomsk just a few weeks before. They moved to live on an isolated weather station on the banks of the Ket River, exchanging urban comforts for the liberty of a life in the wild, away from the world. © Emile Ducke

Once a vast prison ground for political exiles, the banks of the Ket River in western Siberia are now home to a string of solitary settlements whose residents find freedom in the river’s stark isolation.
At a remote riverside weather station, two families had recently made their home, exchanging urban comforts for the liberty of a life in the wild, away from the world.
Further upriver, Old Believers, dissenters from the Russian Orthodox Church, had put down their roots. Persecuted in both Tsarist and Soviet times, the community scattered across the country, settling in its most secluded corners. The Ket River’s isolation, for them, meant protection.
The river was not always so cut off. After a canal was built in the 19th century, the Ket linked two of Russia’s biggest river basins, the Ob and Yenisey, and the commercial and industrial hubs along their shores. For a time, the small and serpentine Ket was a crucial transport corridor. But when the Trans-Siberian railway launched, west-to-east traffic on the Ket River – the farmers and traders and Tsarist troops – began to dwindle. Fewer and fewer travelers needed the Ket.
For some, this offered the promise of personal freedom. Historically, though, Ket‘s isolated location made it perfect grounds for a prison, one that relied more on endless miles of emptiness than on walls or barbed wire. Hundreds of thousands were deported to the area by Joseph Stalin, himself once its prisoner in pre-revolutionary times. After the deportations were stopped, many chose to leave. Many others chose to stay.
At the logging settlement of Katayga, worshippers met for mass. In the absence of a priest, who did not make the six hour journey by river and road to Katayga that day, mass was led by Marina Prosukina. The religious duties she performed are normally reserved exclusively for men. But such strict rules could not withstand the remoteness of Ket. And so, along the river, another kind of freedom was formed. 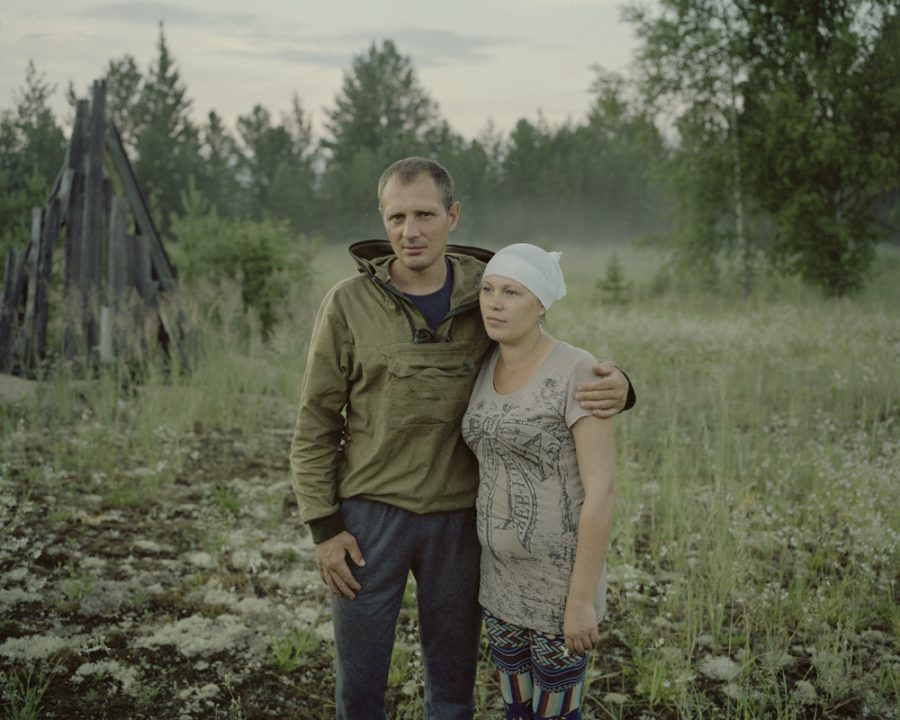 UST-OZERNOYE, Russia - July 06, 2016. Ksenia’s parents, Yevgeny Sadokhin and Olga Voroshilova, pose for a portrait. The family left busy, urban Tomsk for the banks of the Ket River, to man an isolated meteorological station with no phone signal and no internet line. For them, the Ket River’s remoteness offered the promise of personal freedom. © Emile Ducke 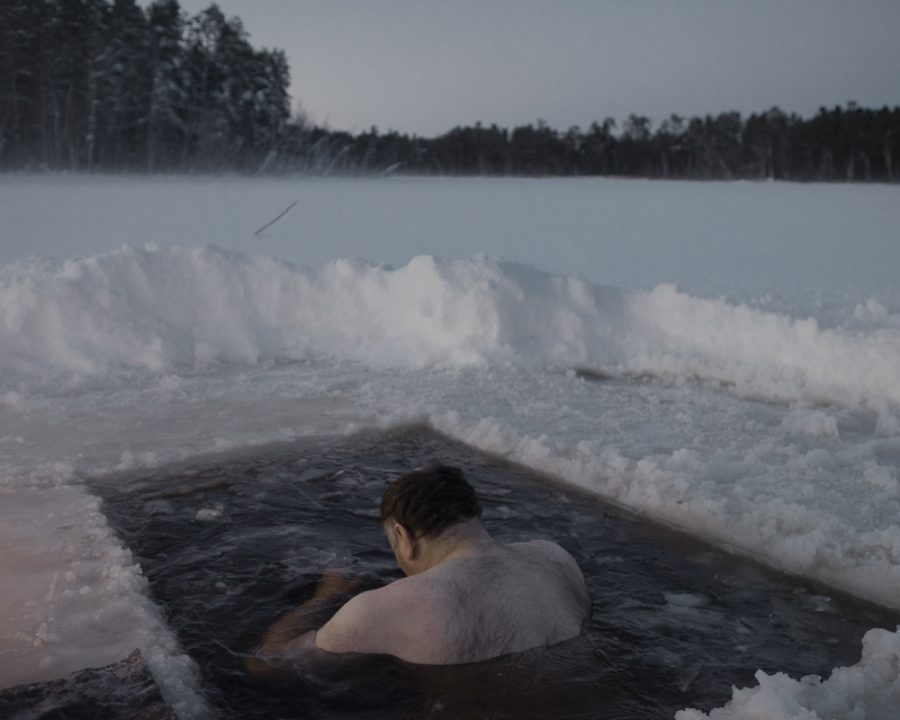 KATAYGA, Russia - January 19, 2018. A resident of the logging settlement of Katayga marks the religious festival of Epiphany, on a day when temperatures dropped to minus 45 degrees Celsius, with a traditional, icy dip. © Emile Ducke 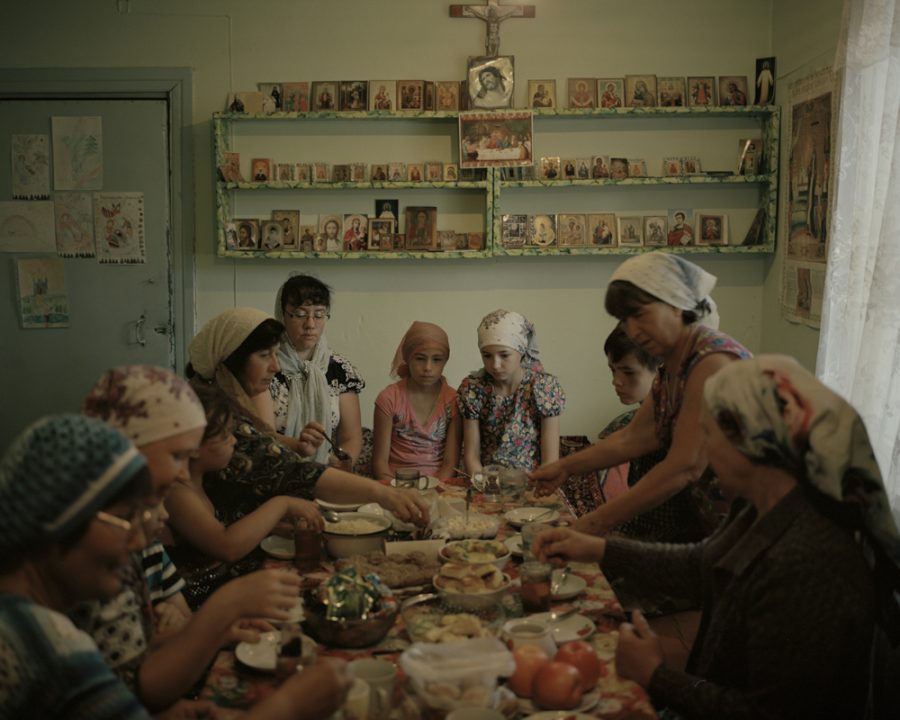 KATAYGA, Russia - July 10, 2016. Worshippers gather after a Sunday service at the Russian Orthodox church in the logging settlement of Katayga. In the absence of a priest, who did not make the six hour journey by river and road to Katayga that day, mass was led by Marina Prosukina. The religious duties she performed are normally reserved exclusively for men. But such strict rules could not withstand the remoteness of Ket — and so, along the river, a different kind of freedom was formed. © Emile Ducke

NARYM, Russia - January 08, 2018. The post office in Narym, which became a place of forced exile in Tsarist times. Many revolutionaries served time there, including Joseph Stalin. When he became the Soviet leader, he continued the practice, deporting hundreds of thousands to the vast and desolate areas north of Tomsk, including Narym. © Emile Ducke 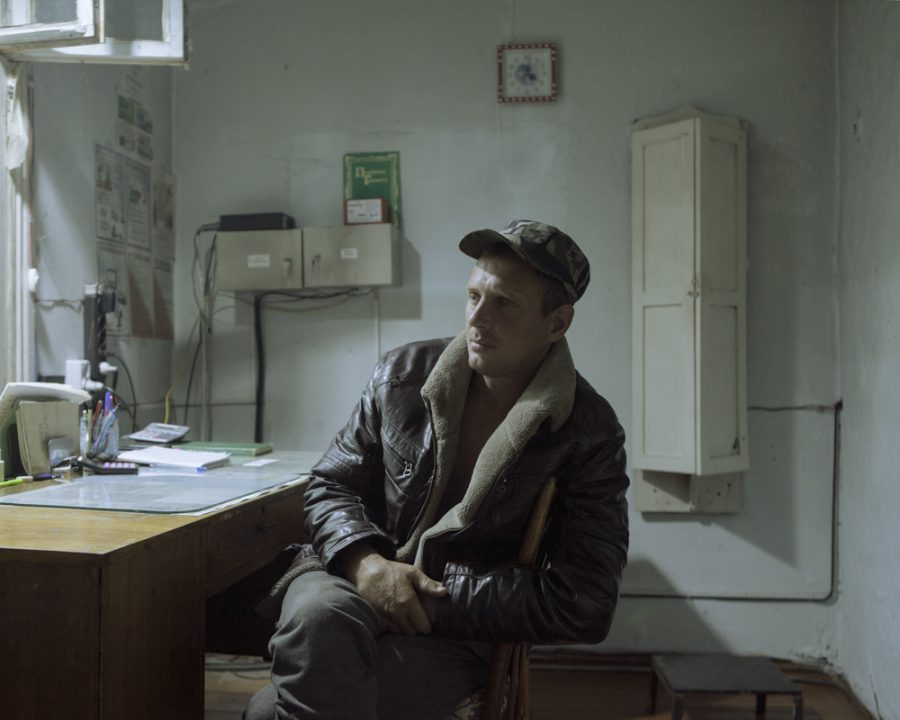 UST-OZERNOYE, Russia - July 08, 2016. Yevgeny Sadokhin transmits the nightly weather report. It is gathered from the wind vanes and barometers surrounding his family’s new home, a secluded meteorological station on the banks of the Ket River, and sent via a crackling Soviet-era radio to the outside world. © Emile Ducke 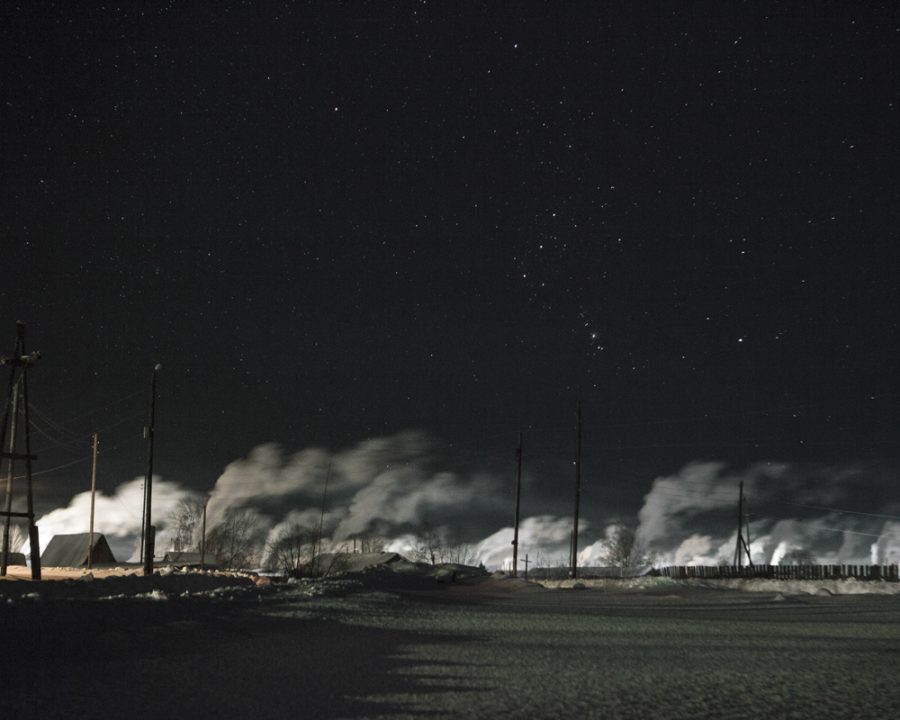 KATAYGA, Russia - January 18, 2018. Smoke rises from chimneys in the logging settlement of Katayga on the Ket River banks, as the temperature on a January night dropped to minus 40 degrees Celsius.© Emile Ducke 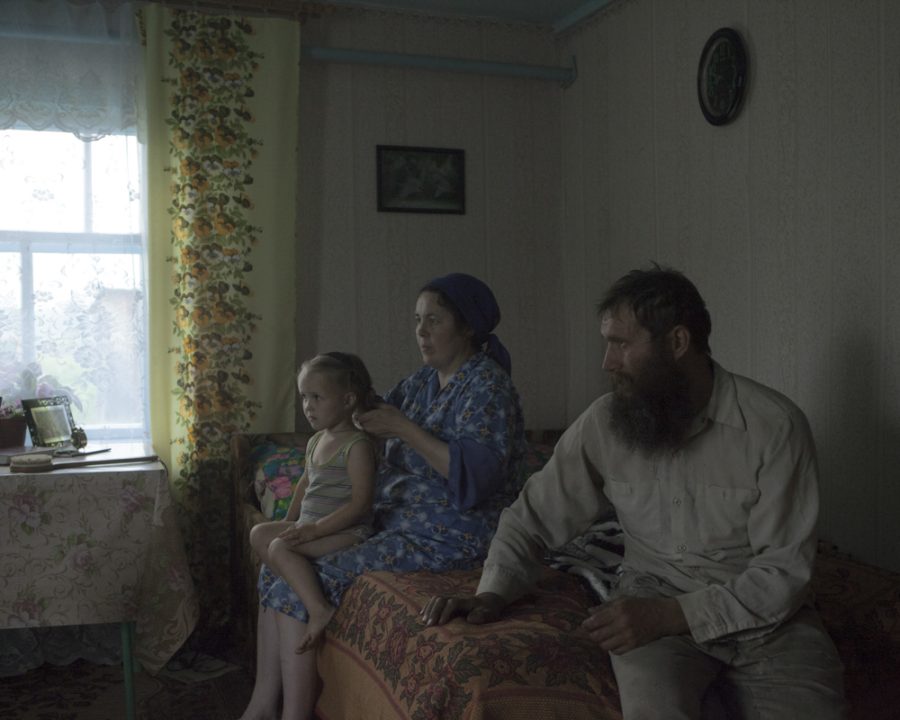 AIDARA, Russia - July 18, 2016. Stepan Borisov, right, and Antonina Borisova sit with their granddaughter in their home in Aidara. The community of about 150 people is made up mainly of Old Believers, a religious group that has historically settled in Russia’s most remote corners to avoid persecution. They live by the strict rules of their faith. © Emile Ducke 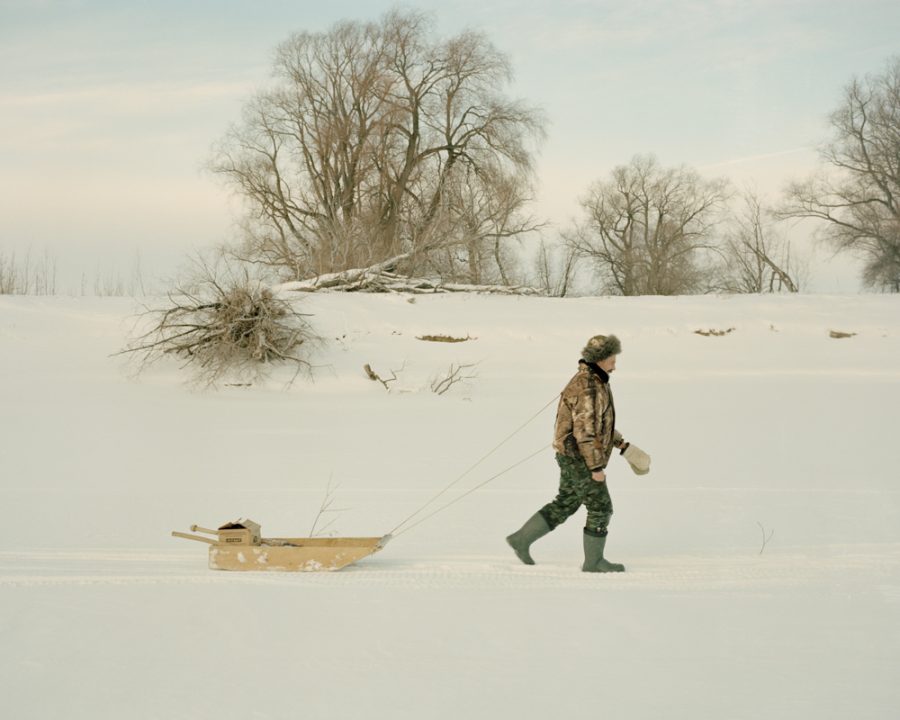 NARYM, Russia - January 10, 2018. A man heads home after ice-fishing on the Ob River, near the mouth of the Ket River. After the construction of a canal in the late 19th century, the small and serpentine Ket River linked two of Russia’s biggest river basins, the Ob and Yenisey. As a result, it was a crucial transport corridor, and a busy route — until the Trans-Siberian Railway was built. © Emile Ducke 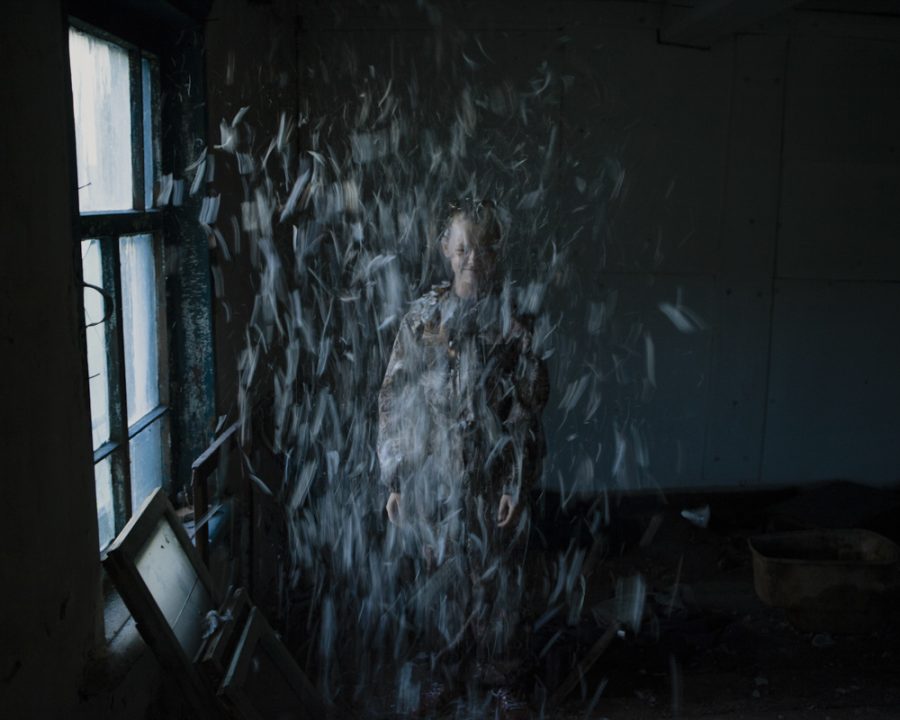 UST-OZERNOYE, Russia - July 07, 2016. Ksenia throws feathers into the air as she explores houses abandoned along the banks of the Ket River, her family’s new home as of a few weeks before. © Emile Ducke

Emile Ducke is a German documentary photographer based in Moscow, Russia. A regular contributor to The New York Times, he has documented the effects of melting permafrost above the Arctic circle, probed the legacy of Stalin’s forced labour camps in the Russian Far East, and captured scenes of traditional life in Chechnya. In longer-term projects, he has focused on the challenges faced by communities in some of Russia’s most remote areas, with photo-essays published by the Washington Post, National Geographic and Der Spiegel, among others. He has been selected a World Press Photo 6×6 visual storyteller, named one of PDN’s 30 emerging photographers to watch, and awarded the Leica Oskar Barnack Newcomer Award.