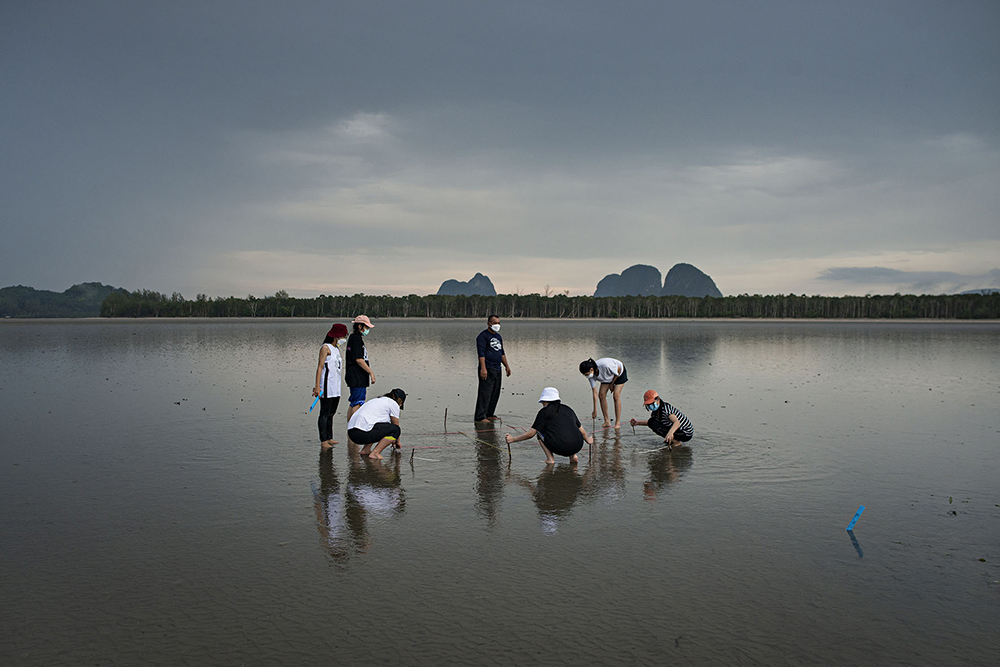 The local community of Trang during the seagrass transplanting activity in the Sikao bay. This project, involving the young generation, started in 2004 after a severe storm hit the coasts destroying large part of the seabed. The PH and the O2 level in the water begun to gradually changed, resulting in a loss of biodiversity. Thanks to these continuous efforts by the local community, since 2018 the seagrass planted in the beginning of the project have totally developed. The ecosystem slowly recovered its health status with a noticeably increase of the fish fauna. ©Giacomo d'Orlando

The ocean covers 71% of the planet’s surface. It feeds us, protects us and absorbs more than 90% of the excess heat generated by global warming. It is an inestimable source of economic, social and cultural wealth – 3 billion people depend on marine and coastal biodiversity for their livelihoods. Oceans and coasts are vital allies in the fight against climate change, with coastal system absorbing CO2 emissions at rates up to 50 times those of the same area of tropical forest.
South East Asia has been classified as one of the regions most vulnerable to climate change, with Thailand and Indonesia in the top ten most affected Countries.
Symbiosis will demonstrate the interconnection of climate change related issues such as coral bleaching, ocean acidification, biodiversity loss, sea level rise and coastal erosion.
The project will investigate how these phenomena affect firsthand the life of the indigenous coastal communities and the marine environment.
In order to stimulate a proactive debate without generate a feeling of surrender and despair, a central part of the project is dedicated on the positive solutions that both local communities and scientific authorities are undertaking in order to preserve the health of the marine ecosystem for our future. This is the first chapter of a broader investigation that will be expanded in the next years in different macro-geographical areas. The aim is building an archive of the changes of our time, inspiring stakeholders to increase positive actions aimed to the preservation of the marine environment for the generations to come. 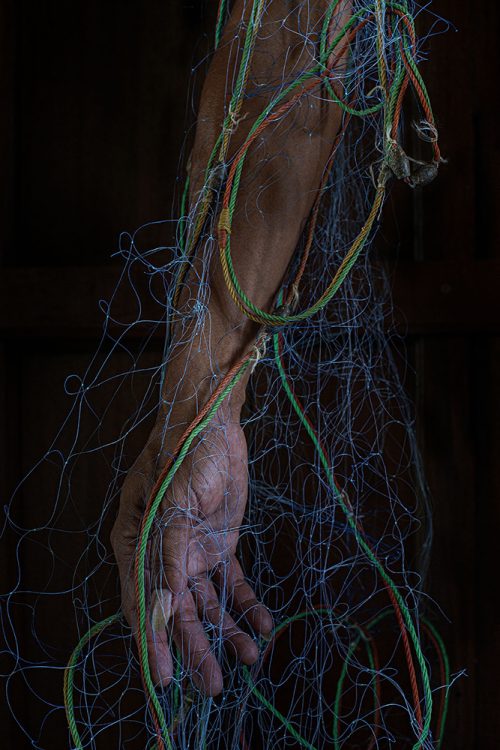 Detail of a fisherman arm and his fishin net in Tom Thong Yai village. One of the causes of the decrease of the fish population is the overfishing practices done in the past years by the big boats. Fishing techniques with trawl nets and dynamite destroyed large part of the reefs, catching indistinctively both adult and juvenile fishes, interrupting their life cycle and consequently their population. People have realised that in the long term these practices weren't profitable anymore due to a drastically decrease of the fish population in the bay. For this reason, since 2012 they decided to change regulations and ban the big boats from the bay, allowing just sustainable fishing practices using the long tail boats and the small fishing nets. © Giacomo d'Orlando 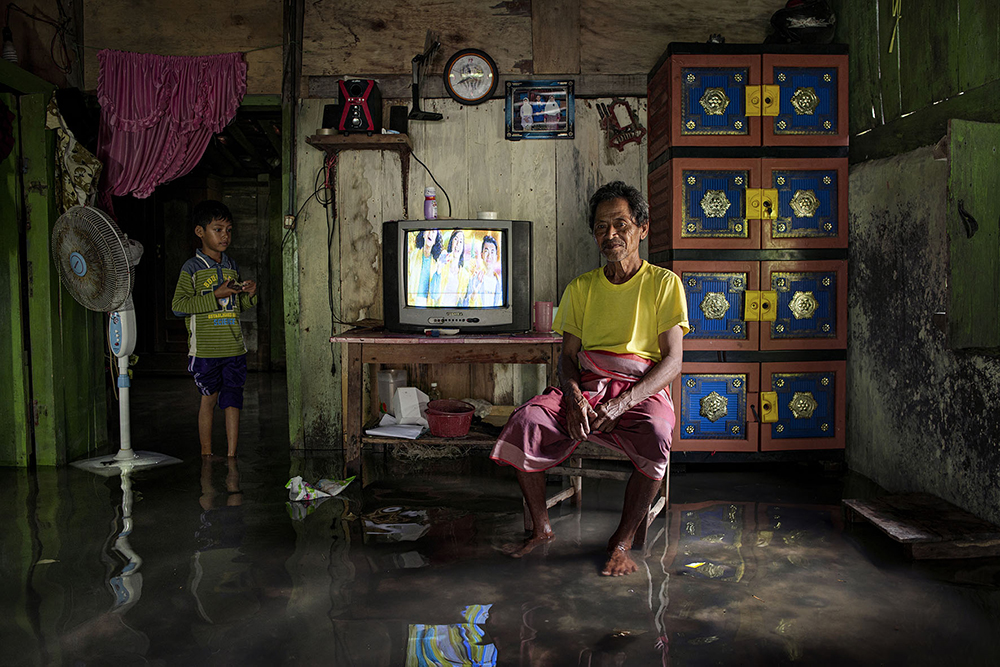 In the north coast of Central Java, many communities lives litterally under the water due to sea level rise and subsidence of the soil. People adopt different strategies to survive, such as building walls or raising the house floor until the drastic decision of moving to another less impacted zone by these phenomena. For those who can't aford these options, keep belongings off the floor the only way to live with chronic flood. ©Giacomo d'Orlando 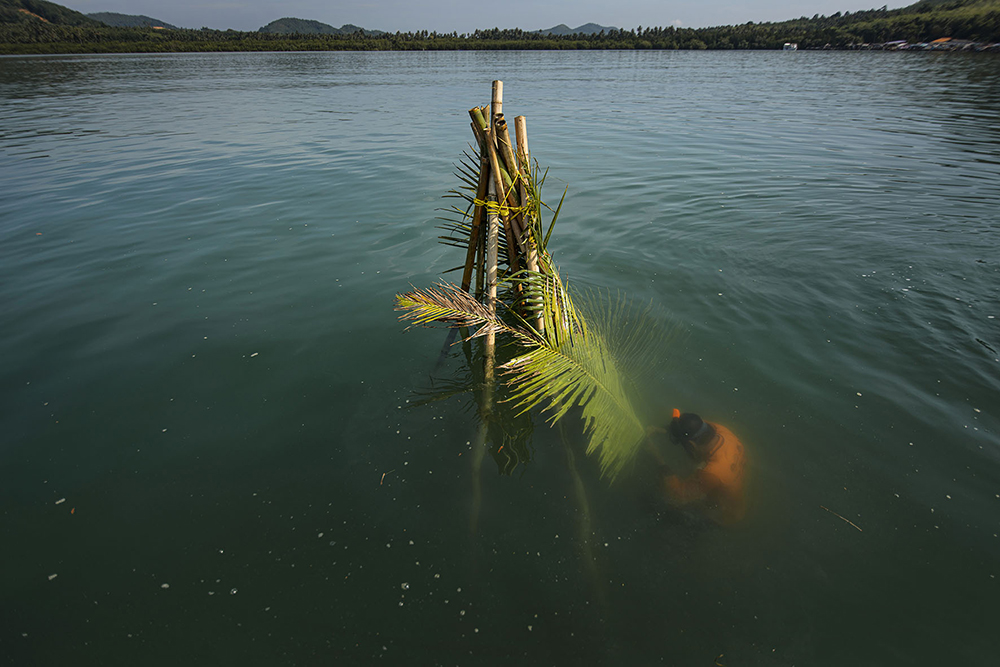 The fish houses project (Sai-Nang) in Tom Thong Yai bay. Sai-Nang are built using bamboo sticks and palm leaves. The local community started this project 15 years ago in order to avoid the use of destructive fishing practices in the bay, preserving its environment. The palm leaves around the bamboo sticks provide a safe place that fish can use as shelter for breeding groung and consequently increase the fish population in the bay. Since the project has started they use to build 100 to 500 fish houses per year. Due to the natural decomposition of the bamboo and the palm leaves, the fish houses has to be replaced once a year. Since the beginning of the project, the fish population (especially tuna, black pomfret, grouper and mackarel) increased noticeably in the bay. ©Giacomo d'Orlando 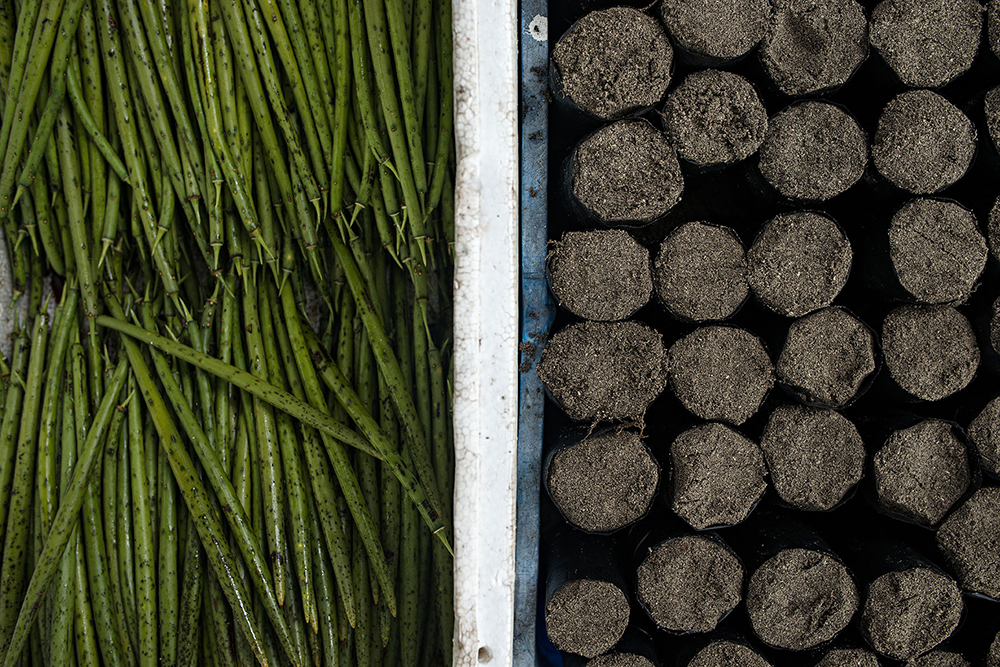 Many coastal communities in the Indo Pacific area are committed in mangroves transplantation activities to increasing their resilience from erratic climatic events. Replanting mangrove forests also contribute to restore vital agricultural land. There are different method to transplant a mangrove. In this particular case near the Jakarta coasts, plots were set up using polybags filled with muddy sand as a substrate for growing propagule. Daily fresh water irrigation is carried out until the first to fifth leaves have grown and are prepared for planting. Depending on the species, once the propagule have been planted, the mangrove can be fully grown in less than 2 years. ©Giacomo d'Orlando 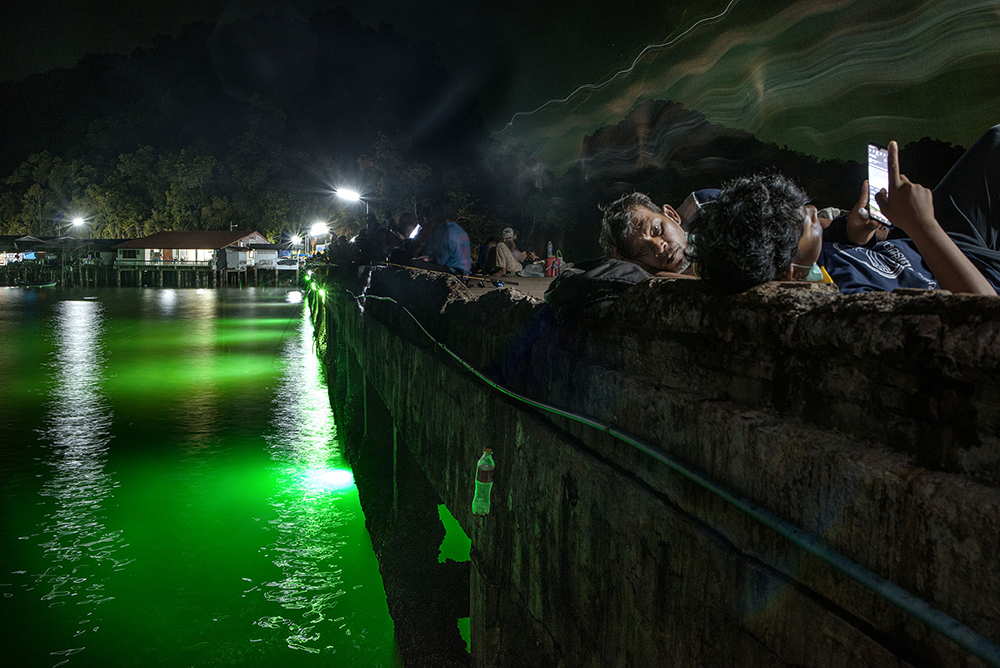 In the majority of Thailand coastal areas, communities rely almost exclusively on income derived from fishing activities Especially from April to July many families dedicate themselves to squid fishing as is one of the most remunerative product of the seafood market. The best hours to catch them are during the dark as squid are attracted by the green lamps used by the fishermen. Due to climate change and biodiversity loss, in the last vears families passed from a daily catch of 80kg to 20kg. This incides negatively on their incomes and many family nowadays need a second activity to sustain themselves, mostly in the rubber or palm oil plantation. ©Giacomo d'Orlando 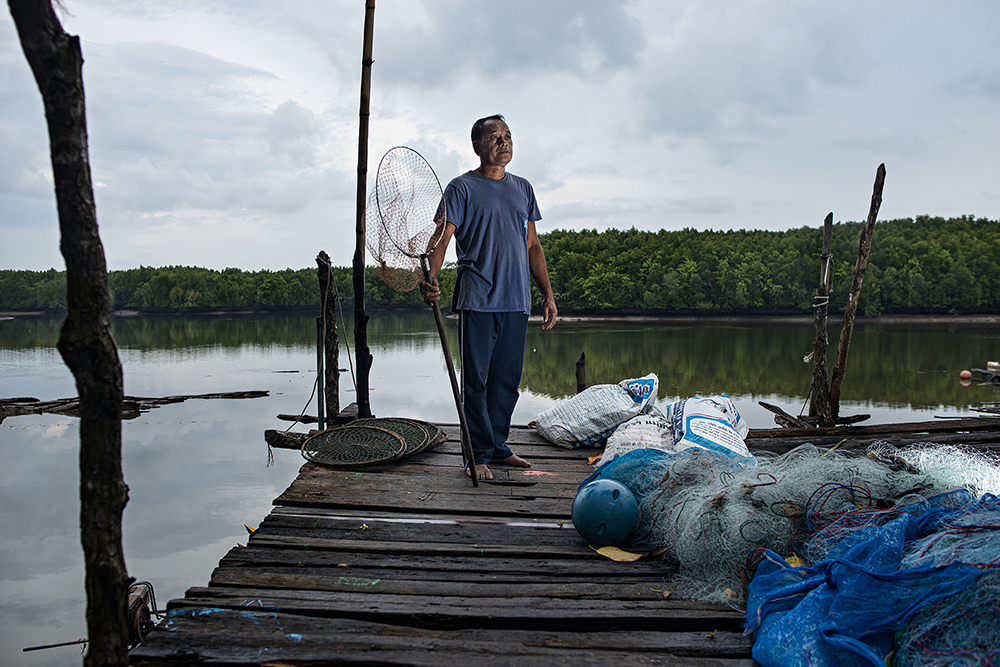 Bunarung Rakru (51) works as a fisherman since he was 10 years old and now taught to his adolescent sons how to practising fishing. According to his experience now in the waters there are less fish compared to the past. His family can still rely on the income derived by fishing activity but since 2019 he started a parallel business as boat driver for tourist who wants to visit the area in order to have a second income. "The fishing activity is becoming very unpredictable due to extreme weather events and environmental changes. Local families need to be prepared to overcome some periods of financial difficulty due to the low fishing seasons". ©Giacomo d'Orlando 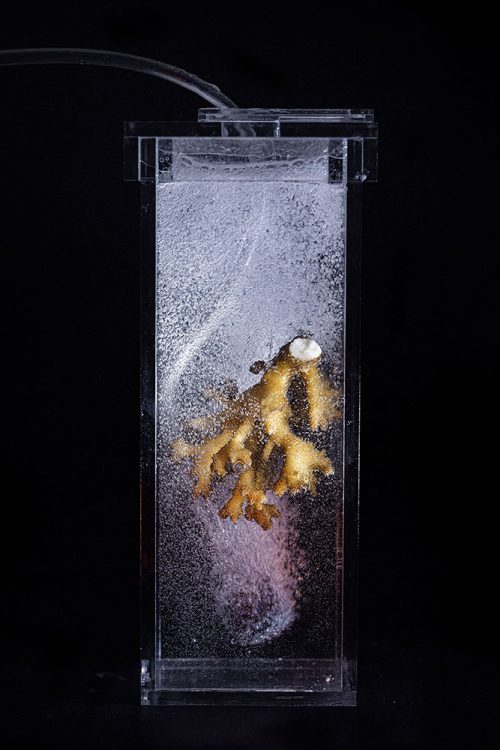 A sample of Pocillopora Acuta is being tested in a continuous nitrogen chamber recreating an hypoxic condition inside the laboratory of MACORIN (Marine and Coastal Research Institute) at Prince of Songhkla University. Hypoxic conditions means that the oxygen level are less than 2 mg/L. Low oxygen levels has an extreme impact on corals as it causes a very fast tissue loss, even in a short period of 10 days. ©Giacomo d'Orlando 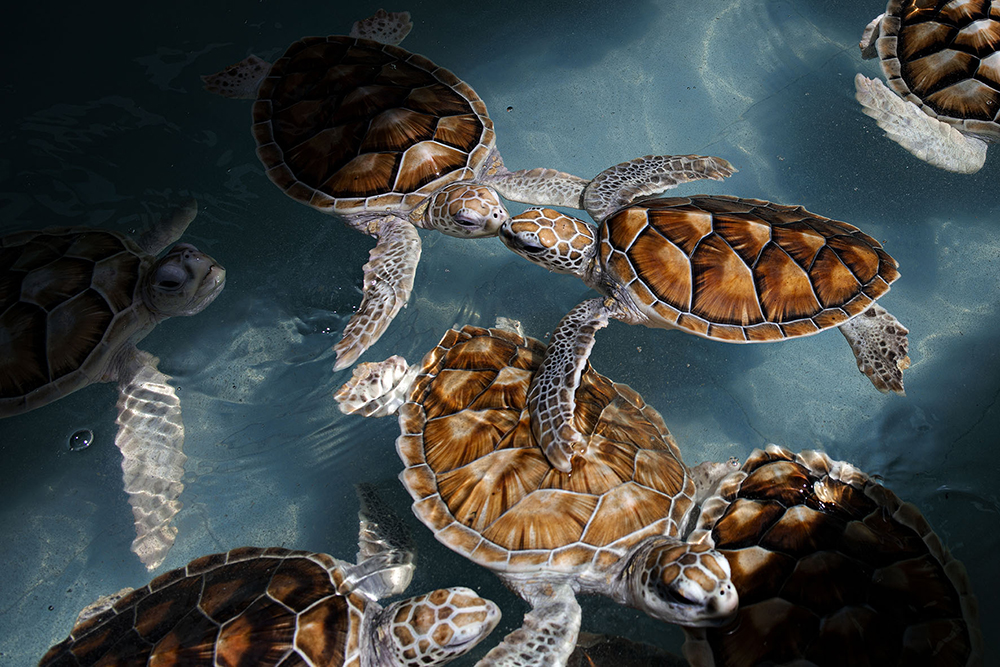 Sea turtles are among the most impacted marine species by climate change. While sea level rise and stronger storms erode their beach habitats, the rising temperatures can change ocean currents, potentially introducing sea turtles to new predators. Furthermore, according to several studies, exist a direct relation between the sand temperature where the turtles nest and the gender of the offspring. The sand temperature infact, influence the gender of the offspring during incubation, favoring the females birth and creating consequently a shortage of males. Since years the Royal Thai Navy is committed in sea turtle econservation activities. Thanks to conservation centers spread all over the Country, they monitor and breed hawksbill and green turtles with the aim of releasing them in the sea increasing their population. ©Giacomo d'Orlando 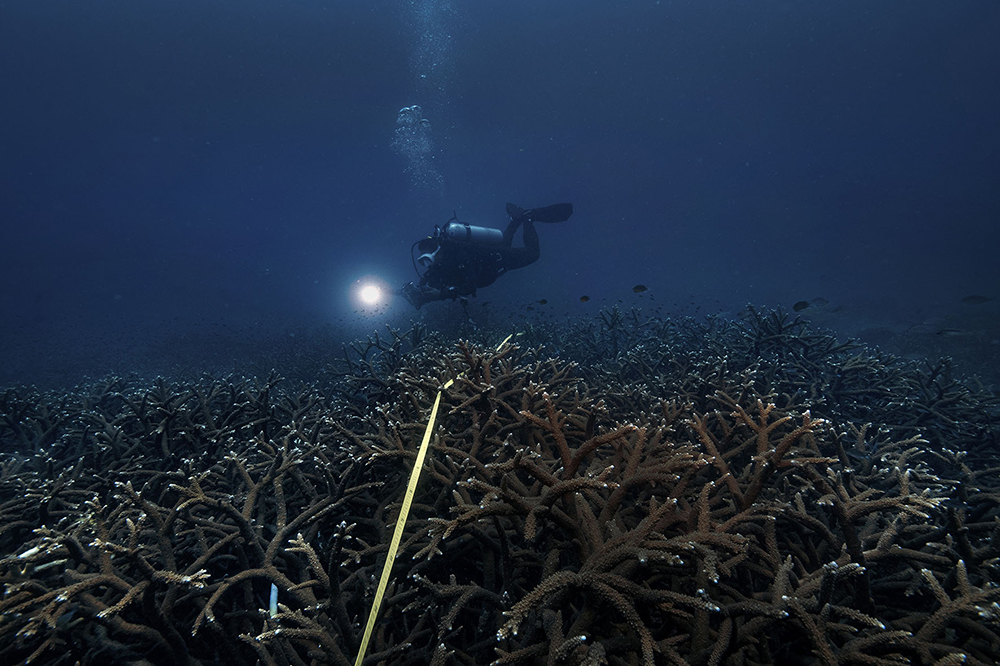 A diver during a Ramkhamhaeng University scientific expedition is conducting a fish survey among the Acropora fields surrounding Koh Tao. This research is important for analyze how the marine biodiversity is changing in the years and how the climate change impact the migratory path of several fish species. ©Giacomo d'Orlando 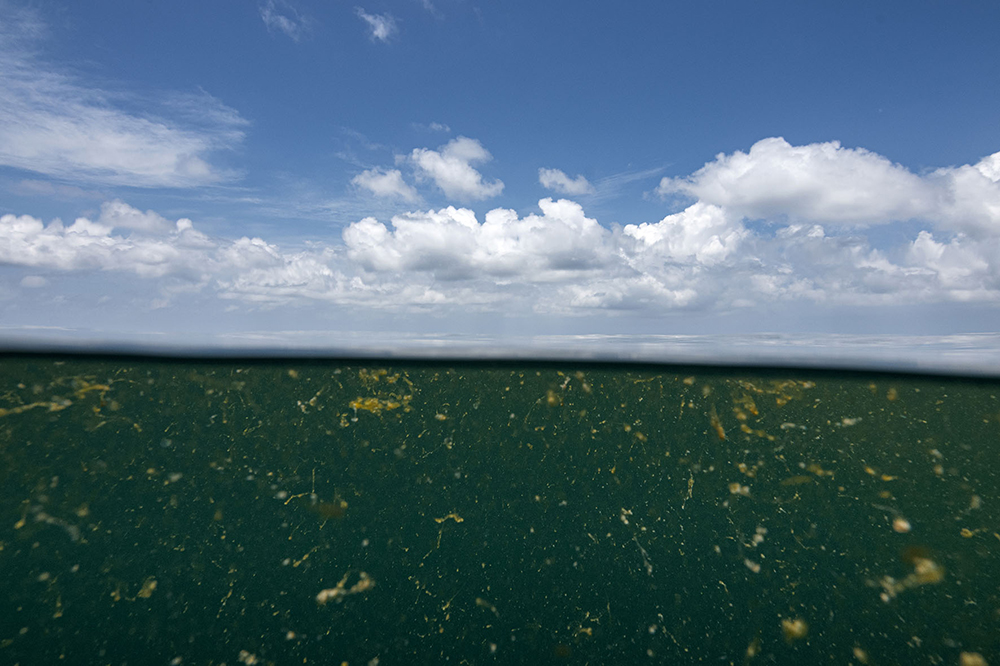 Giacomo d’Orlando (1990) is an Italian documentary photographer focused on environmental issues. His work looks at how the increasing pressure brought about by climate change are reshaping the planet and how present day society is reacting to the new challenges that will characterize our future.
His projects have been exhibited worldwide in photographic festivals and galleries, receiving also prestigious awards such as POYi Award of Excellence in Science & Natural History, Sony World Photography Award in environmental category, UN World Ocean Day Award in Nature Based solutions, IPF Photographer of the year 2022 among the others. Since the beginning of his career, he collaborated with international magazines being published on National Geographic, Washington Post, Stern, Der Spiegel, Mare Magazine, Paris Match, GEO France, El Pais, Vice, D-La Repubblica, FQMillennium, De Volkskrant and more.