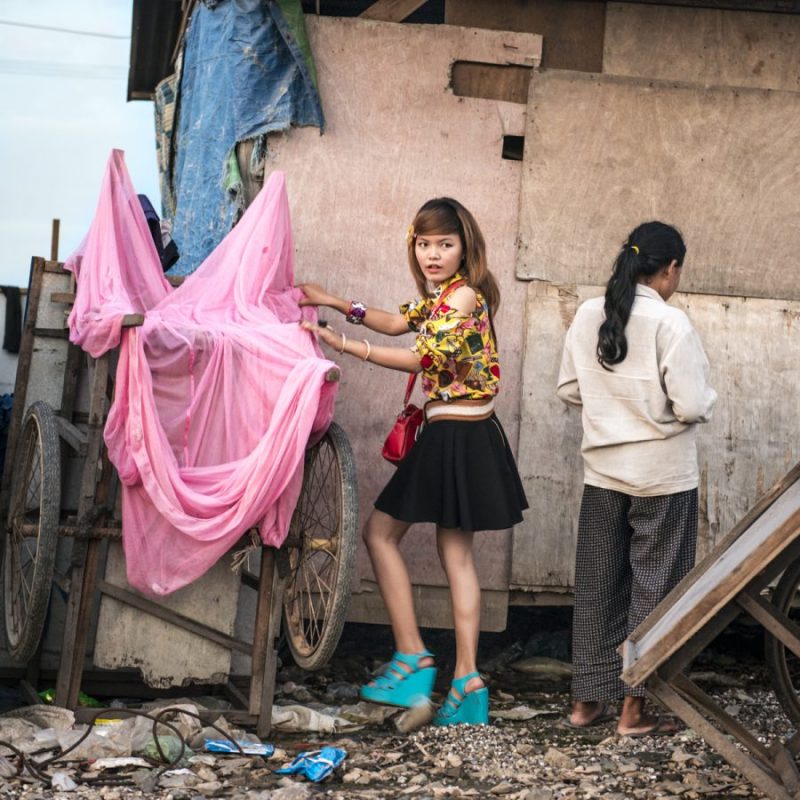 Reality can be witty, inventive or mischievous, even when the backdrop is derelict or tragic. This is especially true in Phnom Penh where different realities blend together, creating a surprisingly complex canvas.
The picture of an old man sitting near a staircase painted with an idealised view of Phnom Pehn is an illustration of this.These little stories are a play between fondness and irony, grace and kitsch, the inner and the strange. 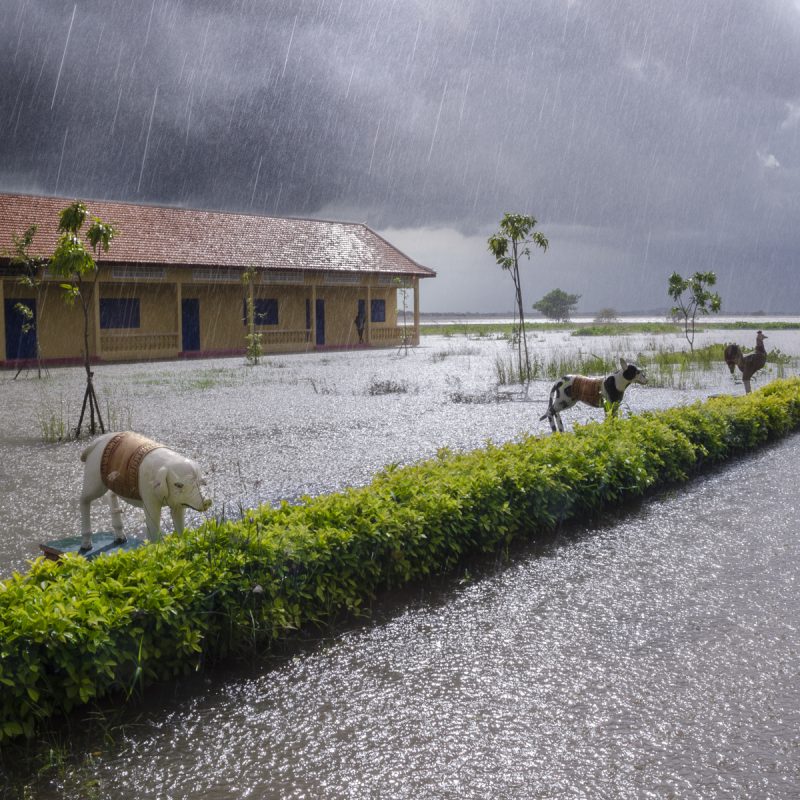 During the rainy season, a flooded school in the periphery of Phnom Penh. The animals are allusions to Buddhist mythology. ©Marylise Vigneau/Anzenberger 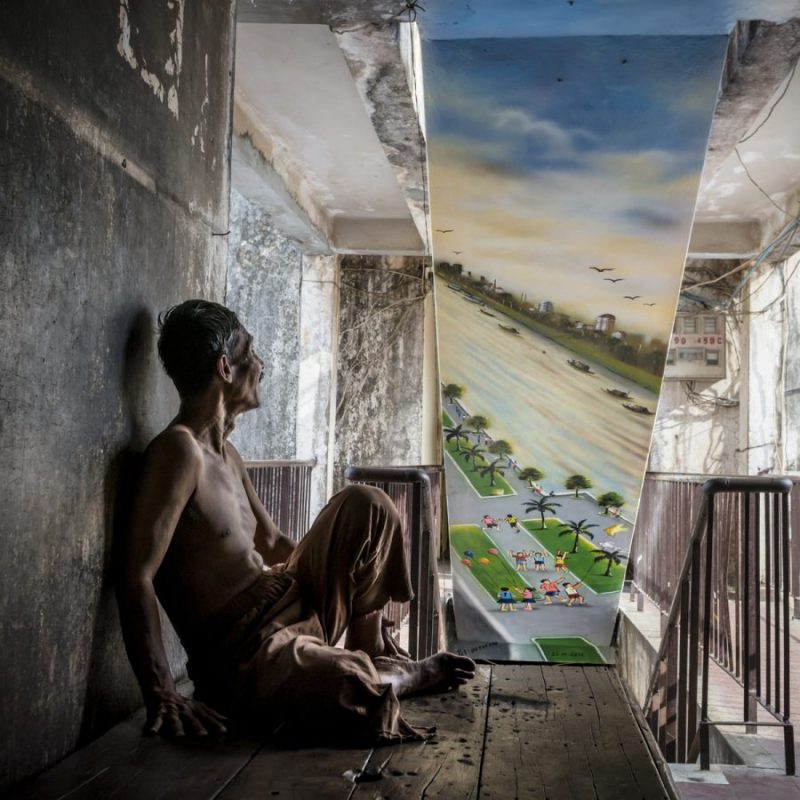 The staircase of the famous dilapidated White Building. Originally known as the Municipal Apartments and inaugurated in 1963, the iconic lines of Phnom Penh’s White Building were designed by Cambodian architect Lu Ban Hap and his Russian counterpart Vladimir Bodiansky. Part of the Bassac River Front complex, overseen by famed urban planner Vann Molyvann, the modernist structure was built during the stability of King Father Norodom Sihanouk’s Sangkum Reastr Niyum period and contained 468 apartments aimed at lower and middle-class Cambodians. It might soon be demolished . © Marylise Vigneau 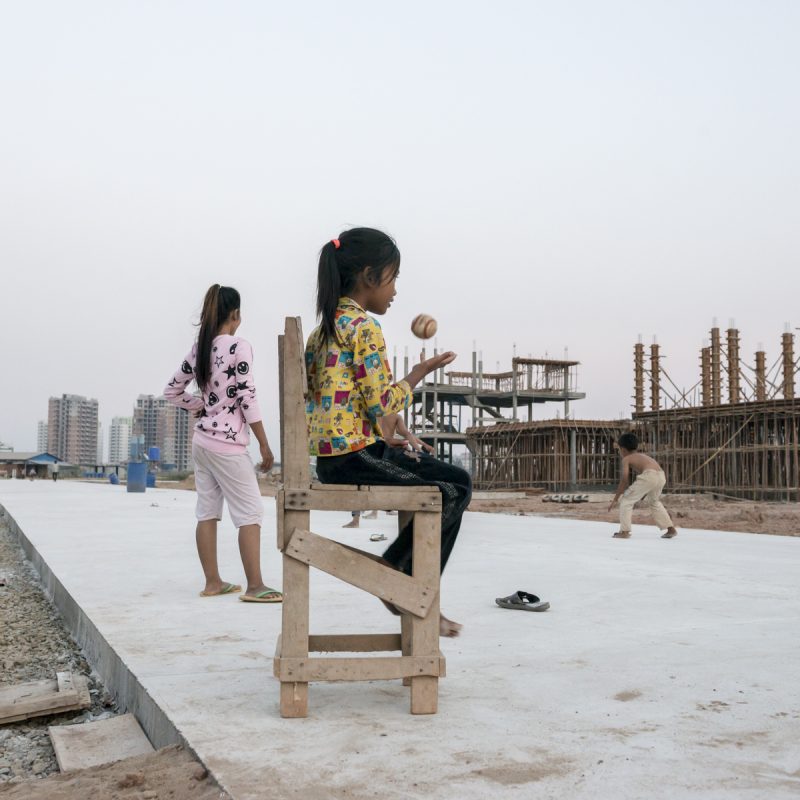 Chidren at play on a construction site near Camko city in the periphery of Phnom Penh. During the construction time the workers and their family live on the site. ©Marylise Vigneau/Anzenberger

At the brand new Town Hall on Koh Pich Island this fake Ferrari made of paperflowers is part of a wedding decorum. ©Marylise Vigneau/Anzenberger 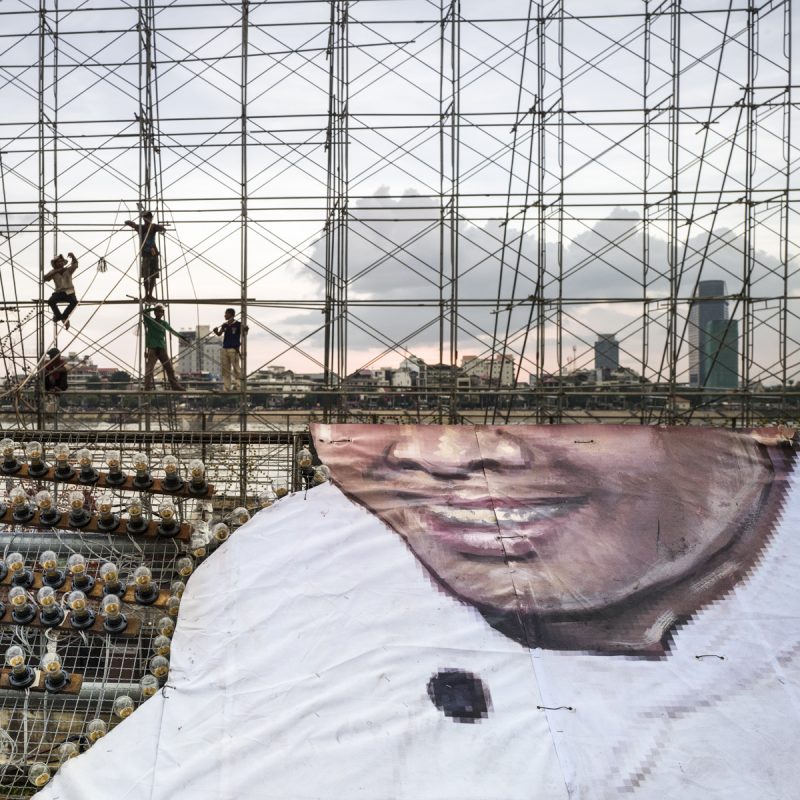 Men are preparing the decoration of a boat that will parade on the Mekong river to celebrate the annual Water Festival. Bon Om Touk is an annual water festival in Cambodia, marking the end of the rainy season and the reversal of flow of the Tonle Sap river, a unique natural phenomenon not experienced anywhere else in the world. During the rainy season, the heavy monsoons force the waters of the Mekong to flow back upstream along the Tonle Sap River to the Tonle Sap Lake. As the rains slow and the water level recedes, the river’s direction once again flows towards the sea, leaving behind rich silt to nourish the lands and plenty of fish to nourish the people. For three nights during November's full moon, villages send teams with their dragon boats to compete from around noon until sunset. © Marylise Vigneau / Anzenberger 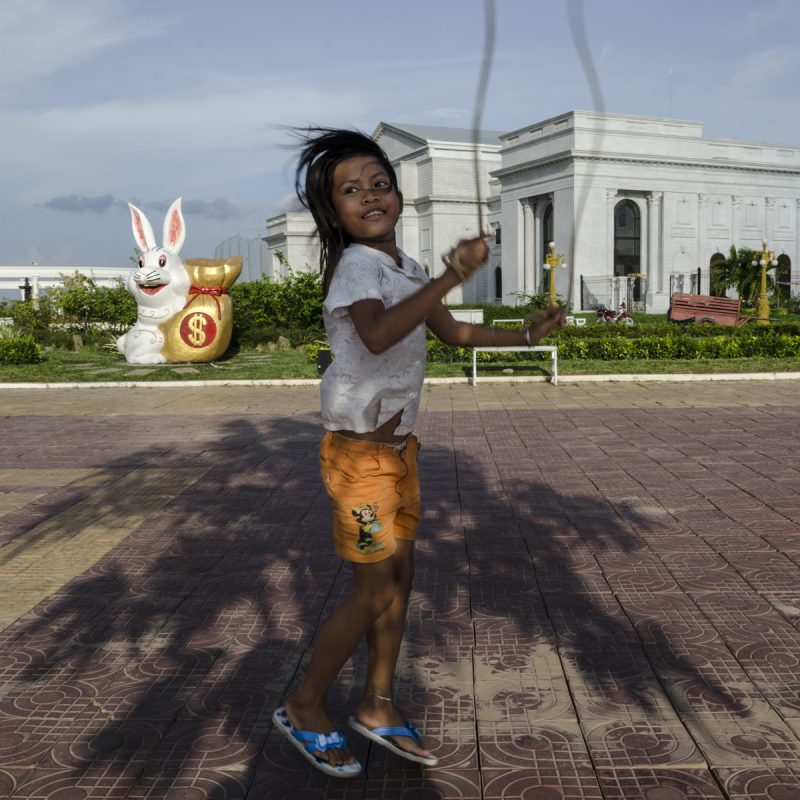 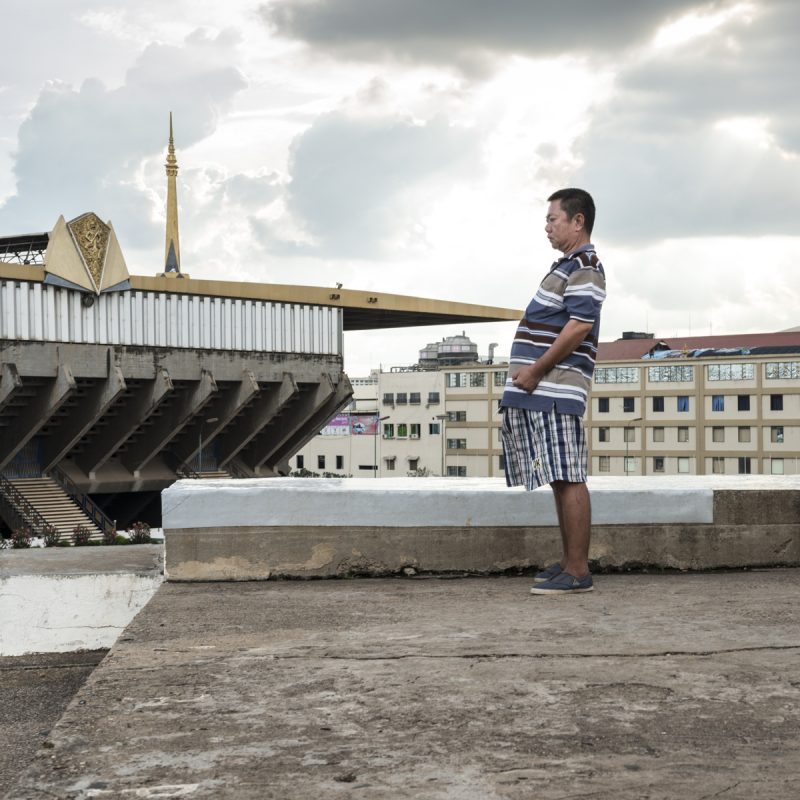 At the Olympic Stadium in Central Phnom Penh. The construction of the National Sports Complex started in 1963 and was completed in 1964. It is a symbol for post-colonial architecture. The architect Vann Molyvann made use of massive earthworks to create the stadium, digging up 500,000 cubic meters of earth to shape the grounds . Nowadays it is popular palce for the local of all ages, particulary at dawn and in the evenings. ©Marylise Vigneau/Anzenberger 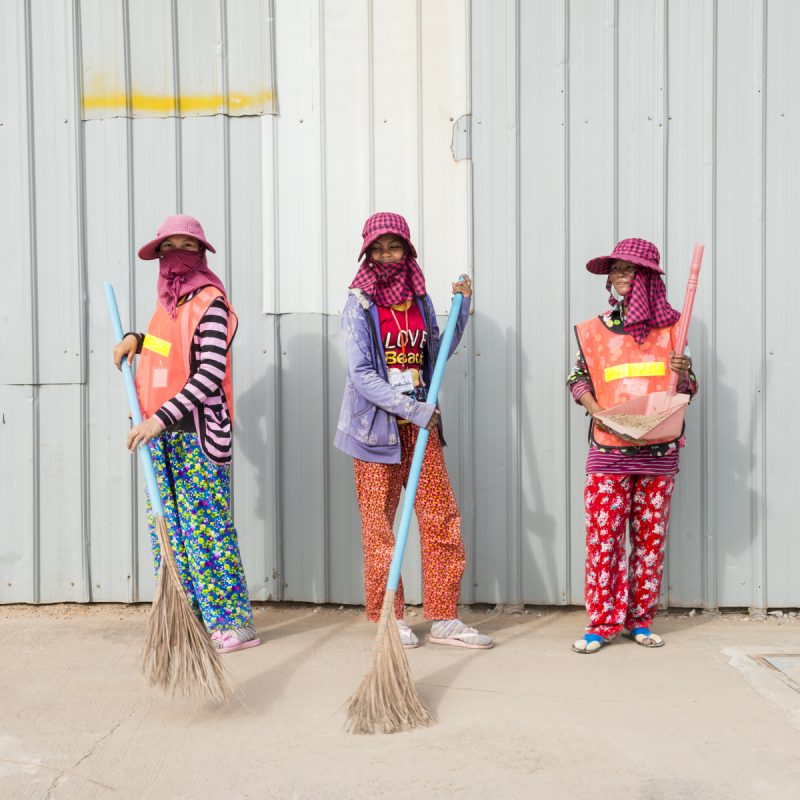 This graceful team is in charge of the cleanliness on Koh Pich Island. ©Marylise Vigneau/Anzenberger 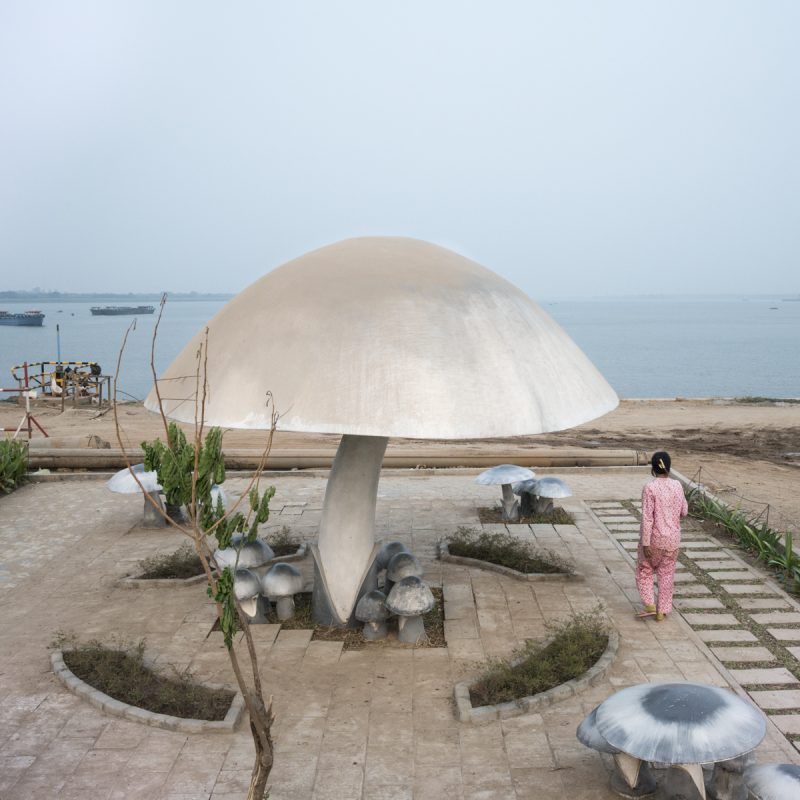 This mushroom is a 2015 addition to the fancy landscape of Koh Pich Island. ©Marylise Vigneau/Anzenberger

Raised in a conventional Parisian family, Marylise Vigneau developed an early taste for peeping through keyholes and climbing walls. Her “Compared Literature” thesis, at la Sorbonne, was about cities as characters in Russian and Central-European novels; where and when the clearest narrative gets lost in a heady, haunting uncertainty.

Despite her fascination with literature, over time her mode of expression has become photography, without her knowing precisely why – may be the mix of precision, immediacy, truth and lies which is behind every image. What attracts her first and foremost is how human beings are affected by borders both physical and mental, this fugitive space where an unexpected, bold and fragile act or glimpse of freedom can arise.

Asia and cities struck by time and oblivion, development or isolation -often the two sides of the same phenomenon- are her favorite terrain. She likes to play with opposites; absence and presence, emptiness and fullness, loneliness and multitude, the very near and the far away.

She is represented by the Anzenberger Agency in Vienna.