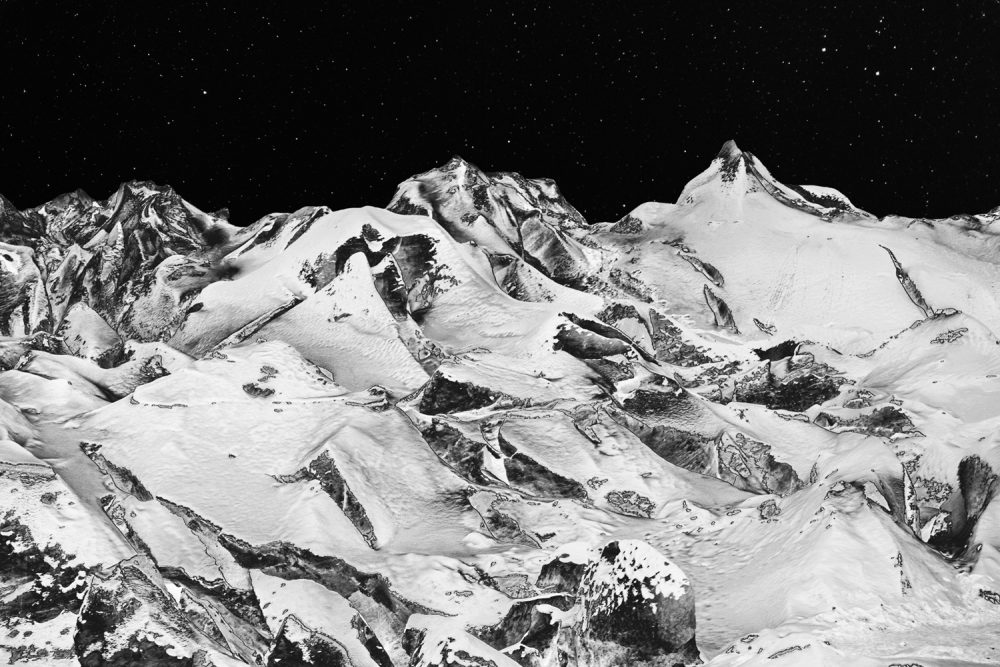 Jökull – The Memory of Glaciers

On August 18, 2019 in Iceland, a commemorative monument was unveiled in honor of Okjökull (officially decommissioned in 2014), the first glacier to disappear on the subarctic island.
A letter to the future was erected on the site of the dead glacier, marking the first report due to climate change in the world.
On this golden letter plate, we can see the mention 415 ppm CO2, in reference to the record level of concentration of carbon dioxide recorded in the atmosphere in May 2019.
According to researchers and scientists, Iceland loses about eleven billion tonnes of ice each year. They fear the disappearance of 400 glaciers on the island in two hundred years if greenhouse gas emissions continue at the current rate.
Jökull is a tribute to the sublime, to the glaciers of Iceland with their faults, scars, swirls, moulins and crevices. The different points of view are shown under the moon and the starry skies of the island for an invitation to contemplation and dreaming. This artwork contributes poetically to the memory of glaciers, awareness and intended for the future generation.
*Jökull = Glacier (translated from icelandic) 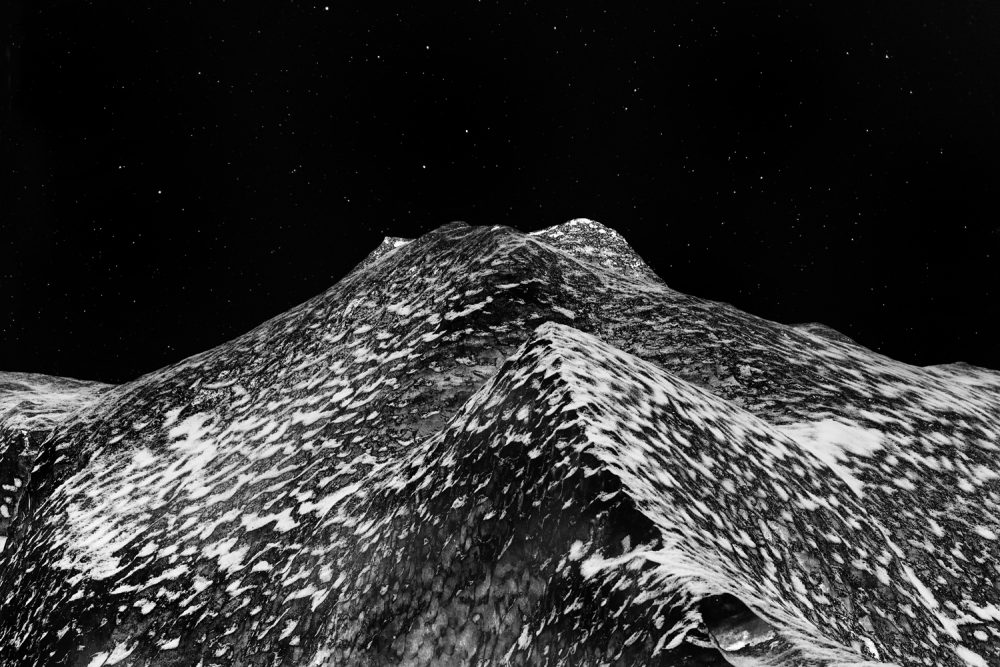 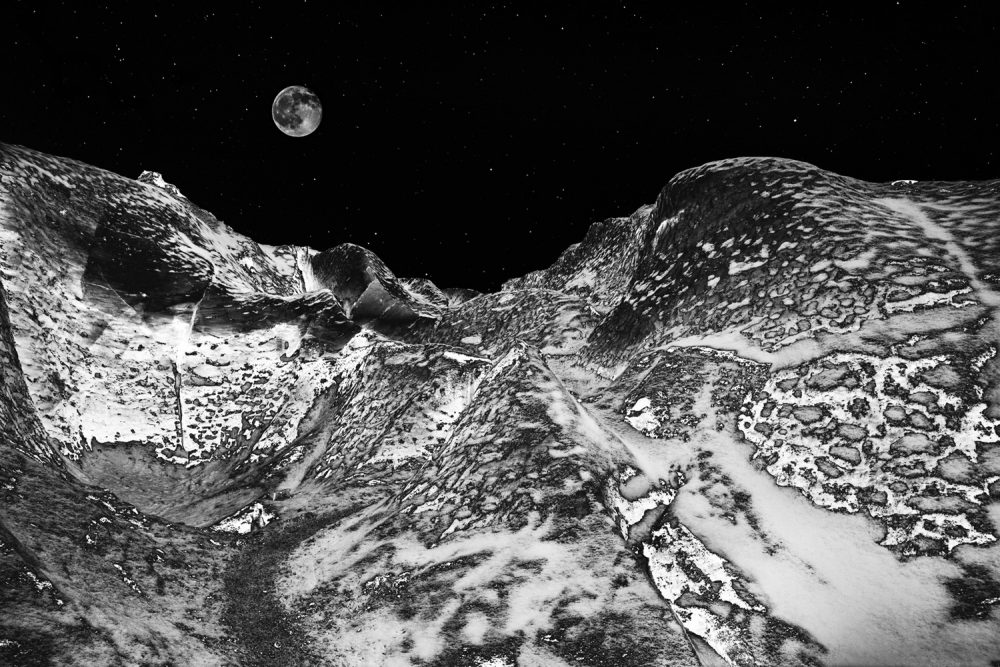 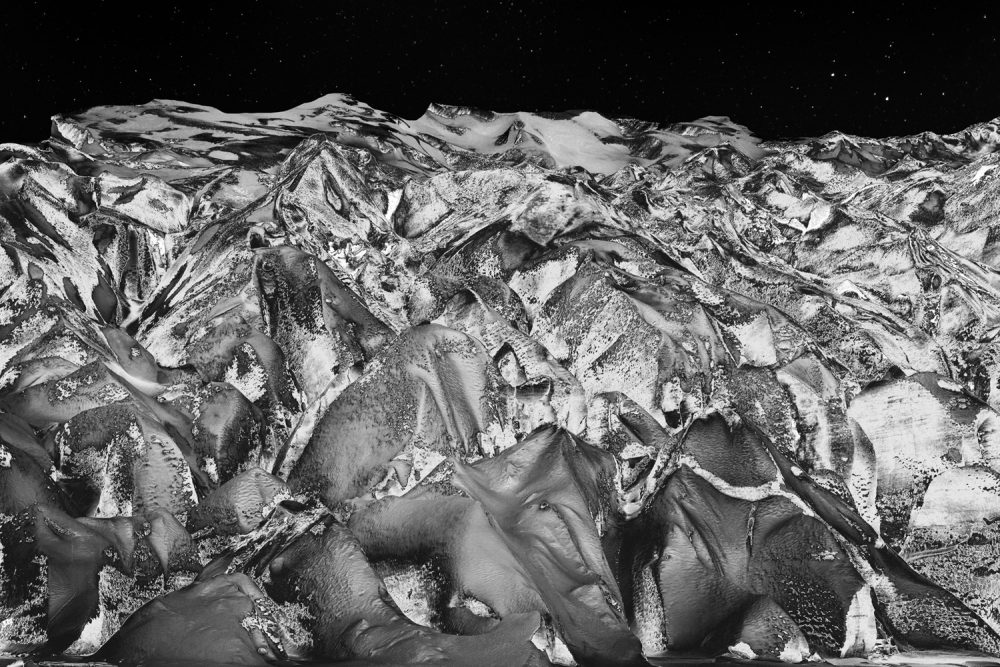 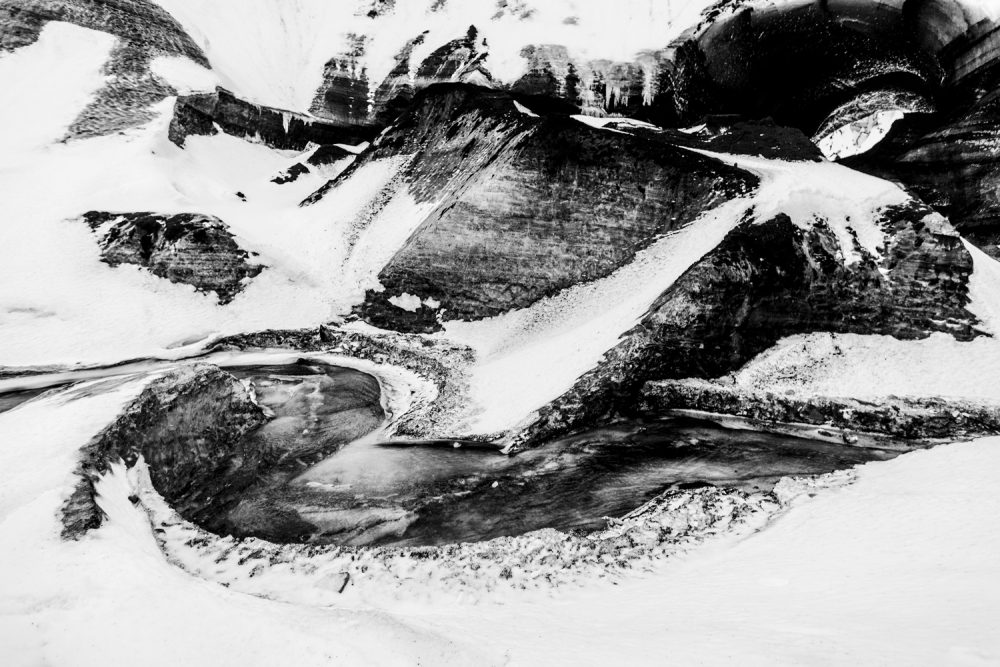 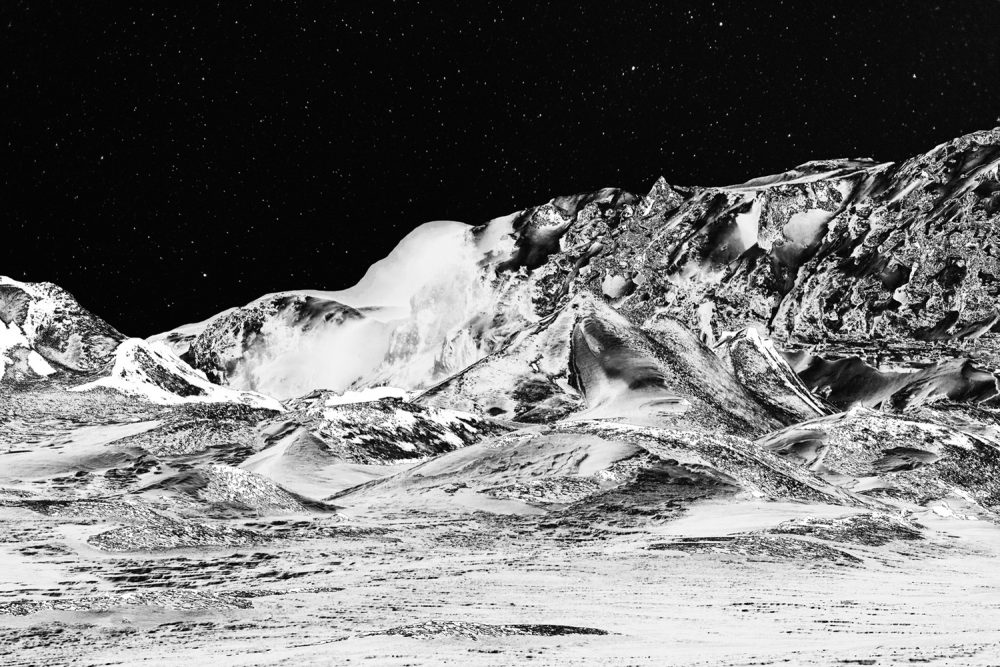 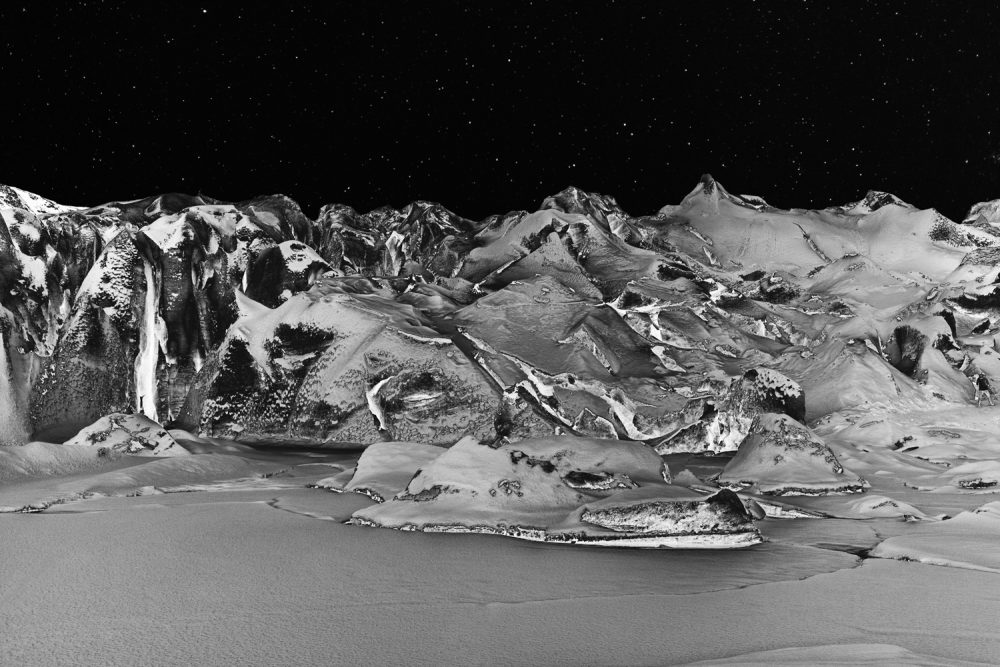 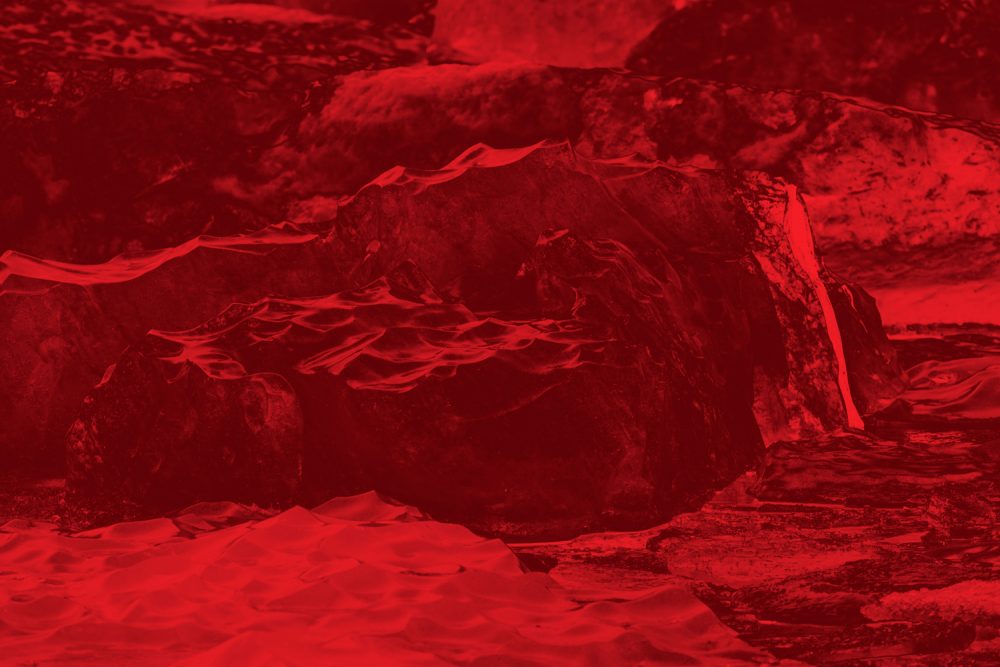 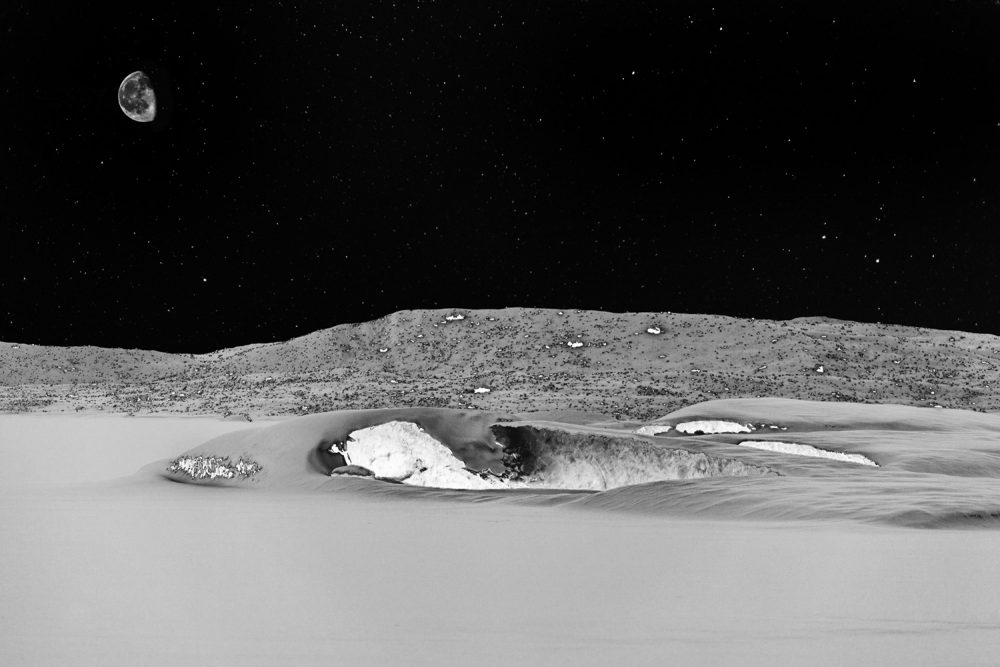 Sandrine Elberg is a French visual artist and a photographer ; she lives and works in Paris, France. Represented by Fisheye Gallery Paris/Arles in France.
She is graduated from the Ecole Nationale Superieure des Beaux-Arts in Paris in 2003 and Sorbonne University in 1997.
The artist establishes a poetic relationship between the myth and iconography of the cosmos and its elements, where true and false aspects intertwine between fiction of appropriation and a distant fascination.
Influenced by the Surrealists, she experiments with the consistency of the photographic medium, expanding its technical and aesthetic possibilities. Her attraction to distant journeys invites us to lead projects inspired by the stories of Jules Verne “Journey to the Center of the Earth” & “From Earth to Moon”.
Sandrine Elberg is inspired in search of territories, hostile climates to create lunar photographs from our collective imagination. When she is not traveling, she works in the darkroom of her artstudio to make light and chemical experiments.
Sandrine Elberg has participated in more than 100 exhibitions (in gallery, museum, fair, festival) in France, Europe and others countries. After her first photobook “Cosmic”then “M.O.O.N” in 2019, Sandrine Elberg has just published “JÖKULL, the memory of glaciers” dedicated to Okjökull the first glacier to disappear on the subarctic island.