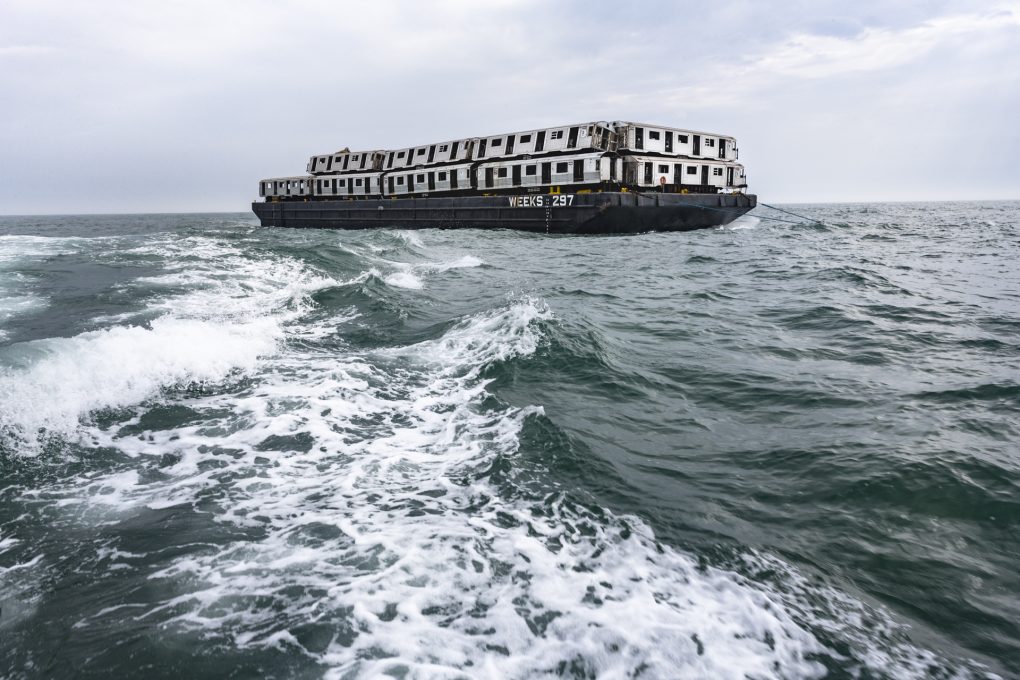 These symbols of industry and busy city life, which carried millions of passengers along New York City’s iron rails for decades, appear shrunken in scale when set against the vastness of the Atlantic seascape. Dropped like toys by brightly-colored cranes off hulking barges between 2001 and 2010, these decommissioned train cars now begin the next chapter of their useful life – as a flourishing new habitat for marine life : the cleaned shells of these subway cars created a flourishing new habitat for varied sea life including sea bass, tuna, mackerel, flounder, blue mussels, sponges, barnacle, and coral, and improved marine environments in areas of the ocean floor that were once barren deserts. 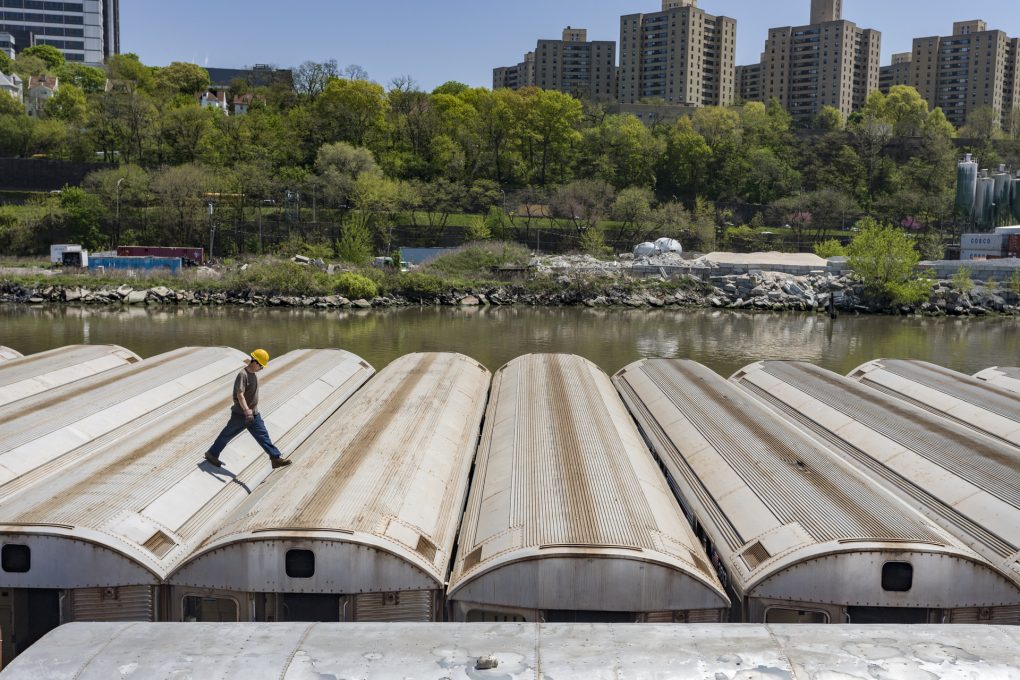 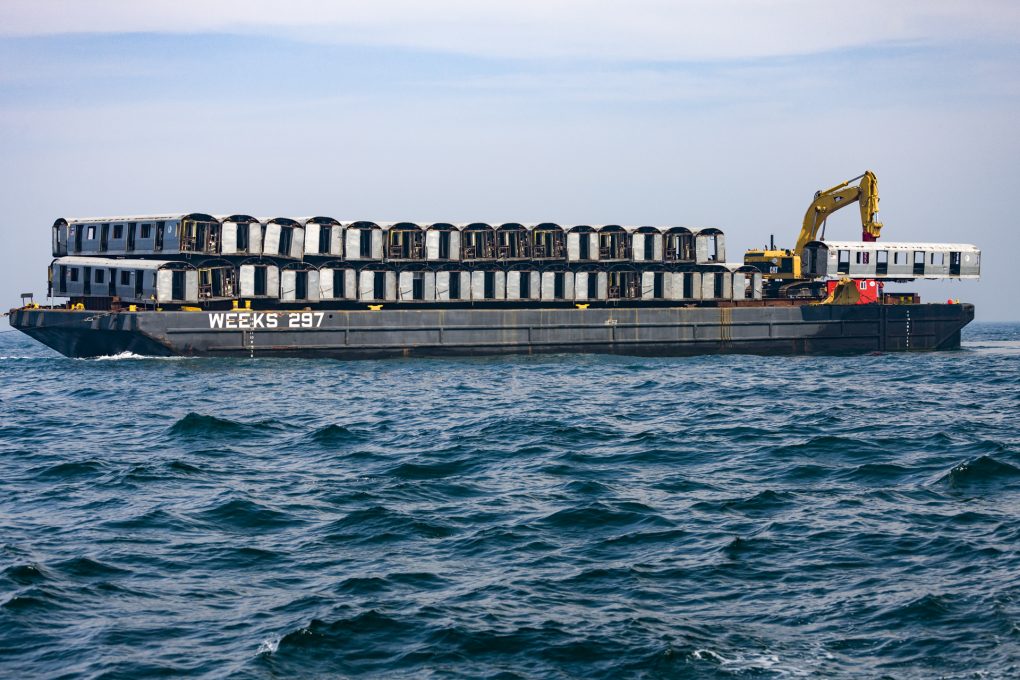 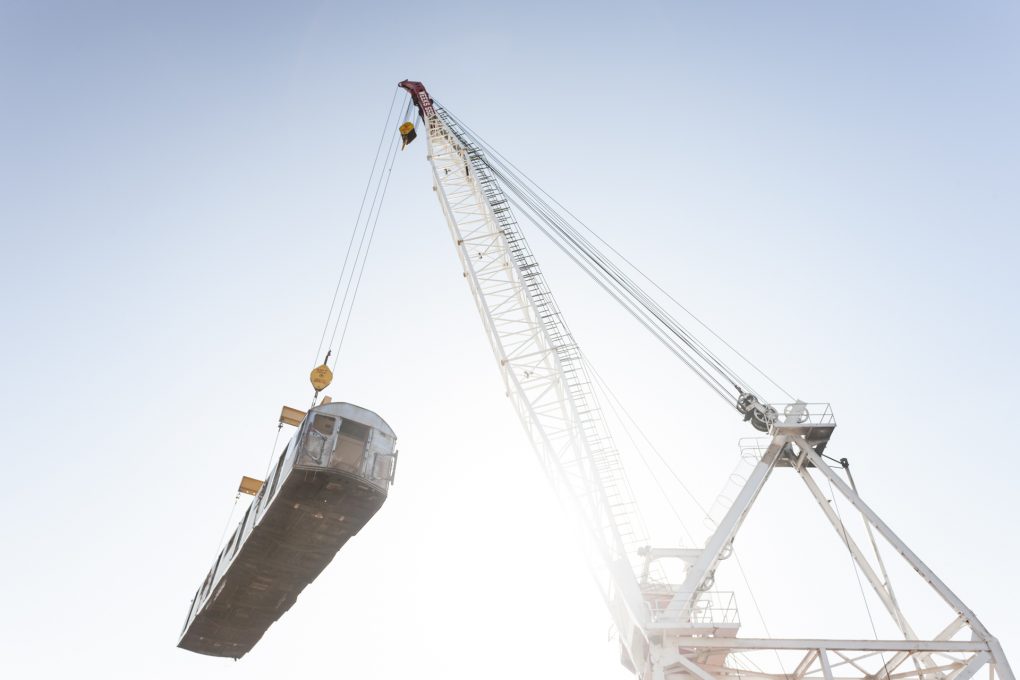 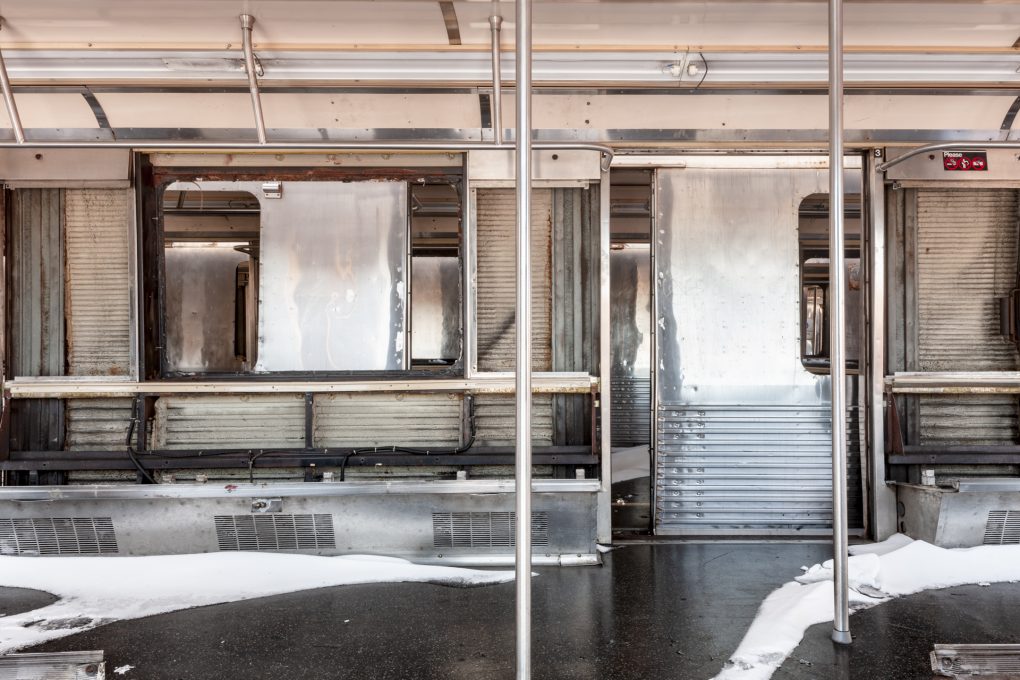 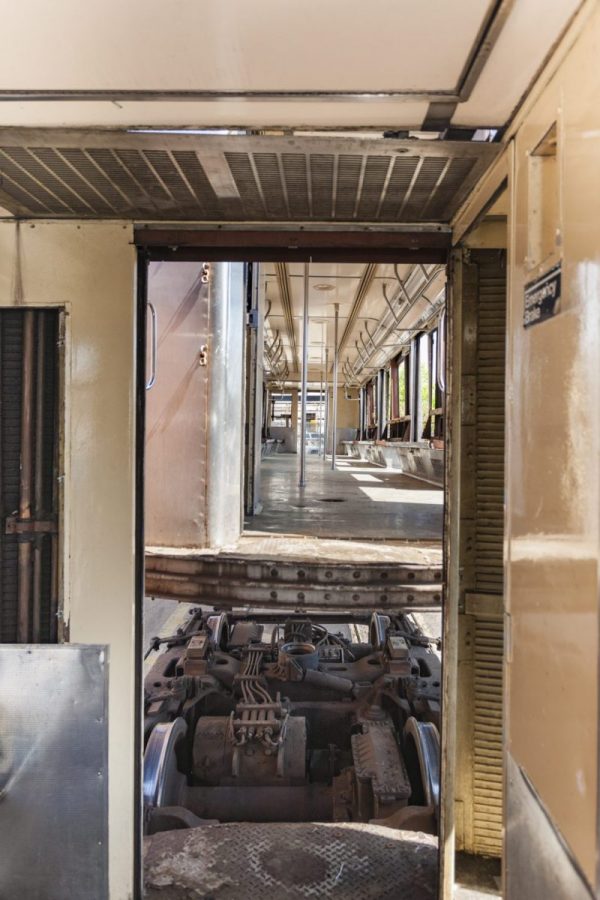 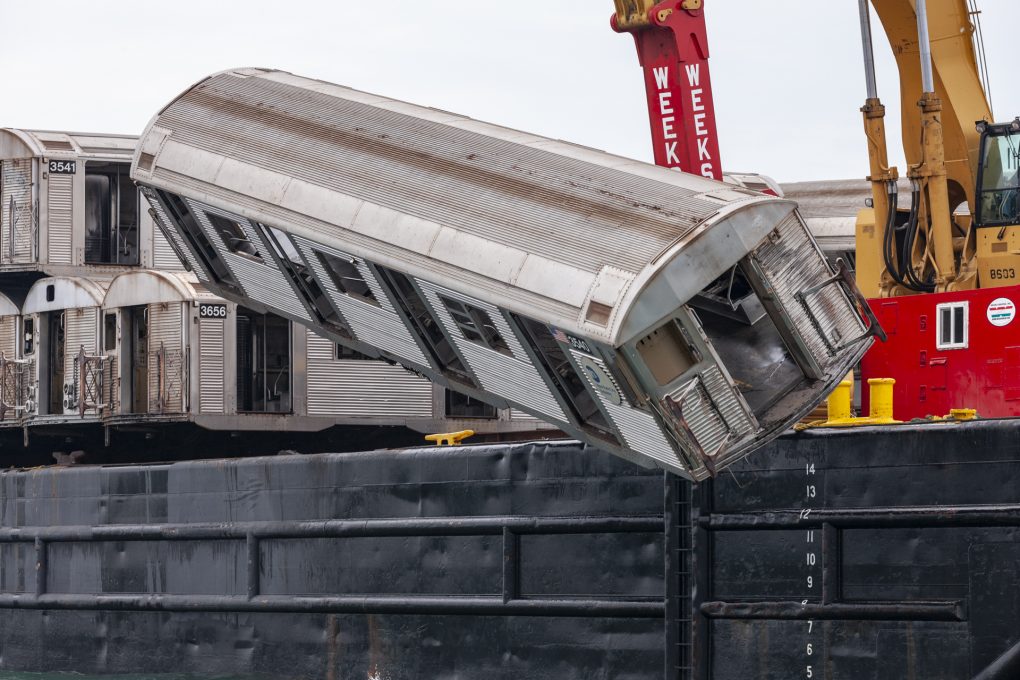 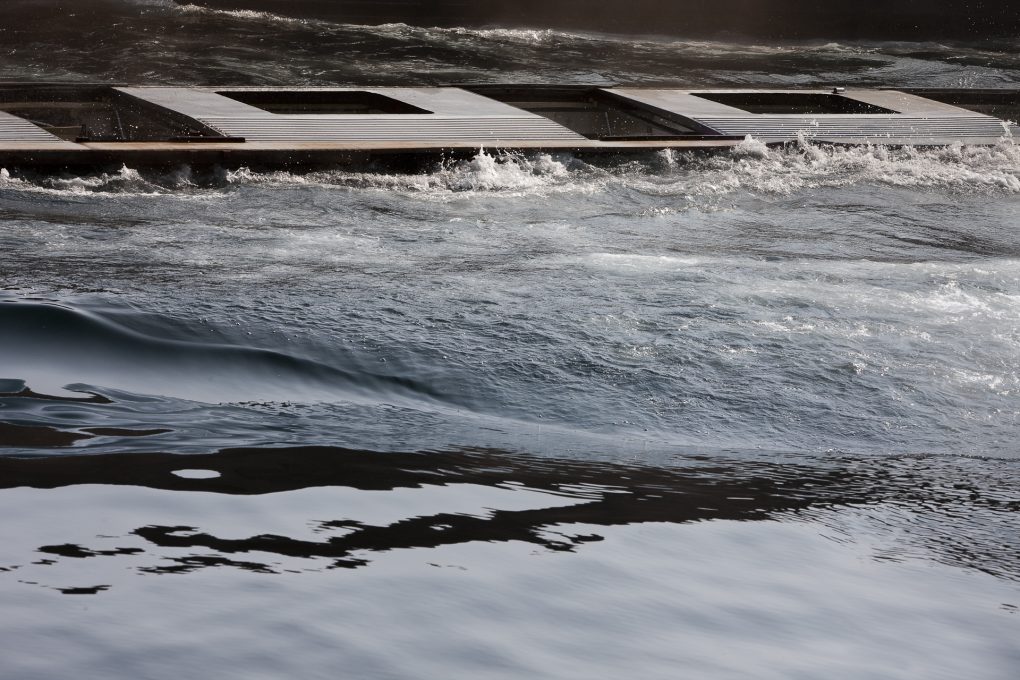 Most people look at construction sites and machinery and see nothing more than concrete and steel. Stephen Mallon looks at them and sees both a surreal beauty and the wonder of their engineering. In 2009, Mallon made a big splash with “Brace for Impact: The Salvage of Flight 1549,” a series of photographs documenting the salvaging of the US Air flight that airline captain Chesley “Sully” Sullenberger managed to safely emergency-land in the Hudson River on January 15, 2009. The images Mallon produced during his two-week effort with Weeks Marine have been in exhibitions in New York, Miami, St. Louis, and Philadelphia and featured on television such as MSNBC, NBC, Wired.com, New York Magazine, Resource Magazine, Vanity Fair, and CBS News.

In 2010 Stephen’s following solo exhibition “Next Stop Atlantic” was received with great praise from the likes of The New York Times, National Public Radio, GQ, Flavor Wire, The Atlantic, Fast Company, Feature Shoot, GQ, and My Modern Metropolis. This body of work has been shown at the Look 3 photo festival in Charlottesville, Miami, St. Louis, and Rome. In the spring of 2012, Stephen Mallon unveiled his 3rd solo exhibition “The Reefing of USS Radford.” This is a continuation of his ongoing series “American Reclamation,” which chronicles and examines the American recycling industry. The work has been reviewed and discussed by the Elizabeth Avedon in Photographer’s I, The Blaze, WIRED, Pro Photo Daily, Lenscratch, and Resource Magazine to name a few. Mallon’s projects often require months, or years of production. His short film about the transportation and installation of the new Willis Avenue Bridge was created from over 30,000 still images. The film “A Bridge Delivered” was reviewed by the Wall St Journal, New York Magazine, GQ, PDN, and WIRED. It was then screened in five festivals in New York, Los Angels and Bristol, England. His latest project,  commissioned by the New York Times Magazine sent him to South Korea to photograph “The Biggest Ship in the World”, the  largest floating structure ever built.

His work has been exhibited widely, and he has been commissioned by a wide range of clients, including the New York Times Magazine, The Wall Street Journal, Fortune, Publicis, Sudler & Hennessey, and MAYTAG. Mallon’s photos have been honored by Communication Arts, Photo District News,  The New York Photo Festival, The Lucie Awards, International Color Awards, and Photo Lucida’s Critical Mass top 50 of 2011.  Stephen is also a leader in the photo community. Since 2002, he has been a board member of the New York chapter of the American Society of Media Photographers and served as president from 2006 to 2009.  He speaks frequently at universities and participates  in student portfolio reviews giving feedback on their work. He lives in New York with his wife Sascha and their young daughter Josephine.