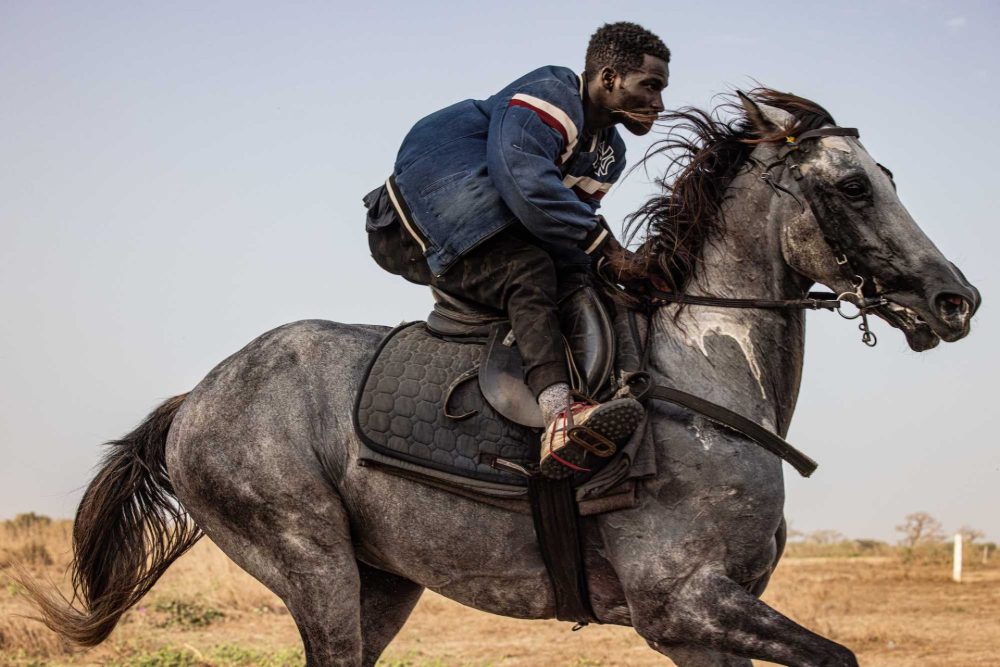 Horse racing is one of the most popular sports in Senegal, along with wrestling and football. The jockeys become professional at a very young age. Among them, Fallou Diop, 19 years old, the national star who is winning one victory after another, galvanizing a youth striving for its future.
This young Senegalese rider has been making a name for himself in horse racing for several years. He trains in the suburbs of Dakar, near the Pink Lake.
The best male hope of Senegalese jockeys, nothing predestined this child from an underprivileged background who left school at the age of 12 to ride a racehorse and win one race after another. Today, Fallou Diop can earn up to 600 dollars per race, in a country where the average monthly salary is about 180 euros.  With this money, the young man helps his father, a farmer, who has two wives and fifteen children. He pays for his siblings’ schooling, has financed a new roof for his family and helps his neighbours in Niaga, his home village. He is always surrounded by a crowd of young fans. Many are hoping to become jockeys, although few will be able to make it.
The equine industry is a source of employment for Senegalese youth, in a country where unemployment among 15-34 year olds is 15%. Fallou’s dream is now to compete in Morocco and France where he hopes to train in 2022 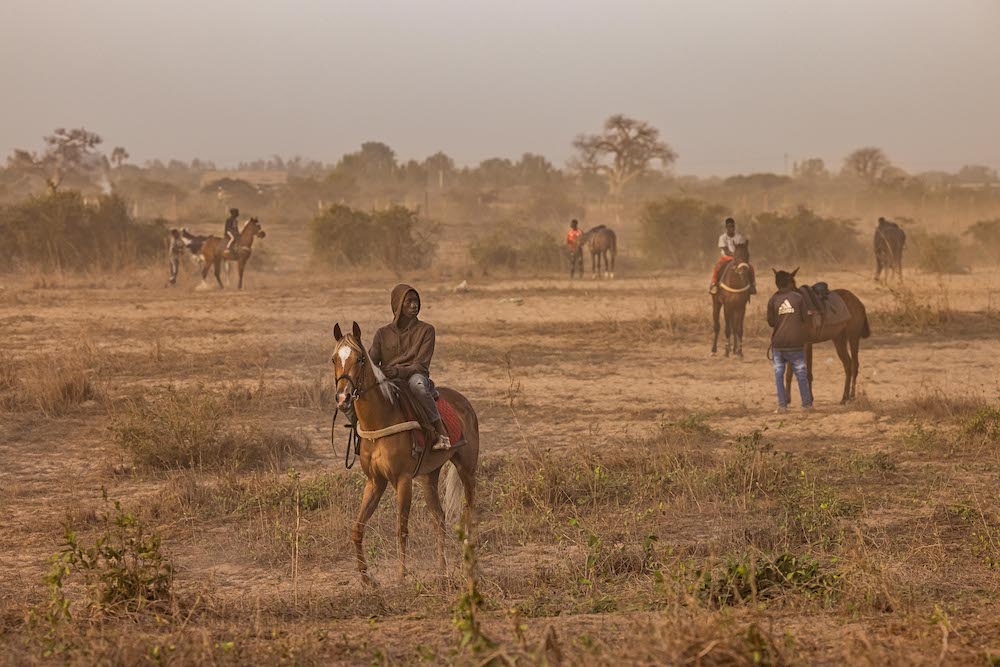 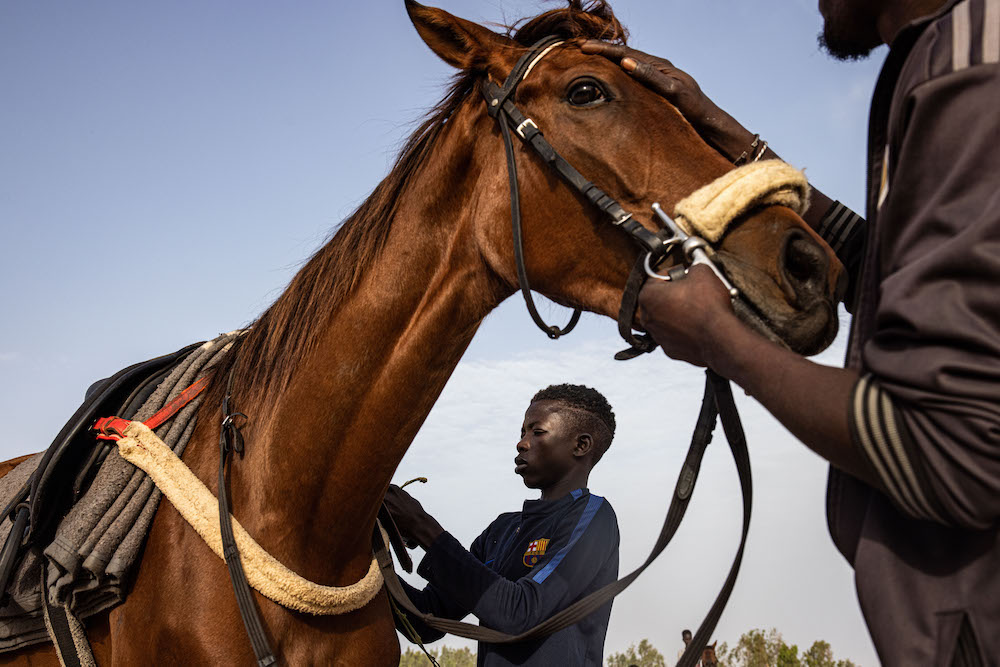 May 2021. FALLOU IN TRAINING. Niaga. On the outskirts of Lac Rose. Training ground. Three times a week the jockeys come to train at dawn from 6am until 11am. All jockeys are affiliated to the Lambafar stable. Also present are the grooms (youngsters aged between 8 and 17), coaches and also horse racing fansl. The jockeys become professional from a very young age. Among them, Fallou Diop, 19 years old, the national star who is winning one victory after another and galvanising a youth striving for its future. The best male hope of Senegalese jockeys, nothing predestined this child from an underprivileged background who left school at the age of 12 to ride a racehorse and win one race after another. © Thomas Morel-Fort 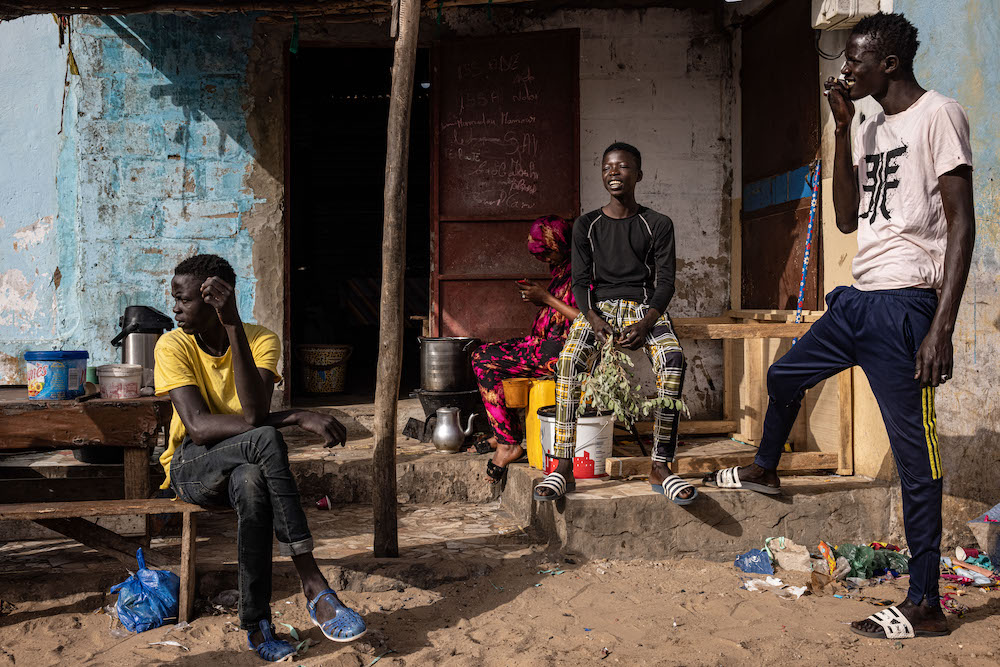 Before leaving for Thies for the Grand Prix of Kirene. Fallou drinks a coffee with his friends and trainers. The café is run by Mr Bao, the owner of the Lombafar stable, so that his jockeys can come and have a cup of Touba coffee whenever they want. The Haras des Ecuries Lambafar de M. Bao, where a whole team takes care of the horses of M. Bao. The grooms are quite young. Some go to school as well but others become grooms from the age of 14. The equine sector is a source of employment for Senegalese youth, in a country where unemployment among 15-34 year olds reaches 15%. The jobs offered are varied: stallion, farrier, groom, veterinarian, etc. © Thomas Morel-Fort 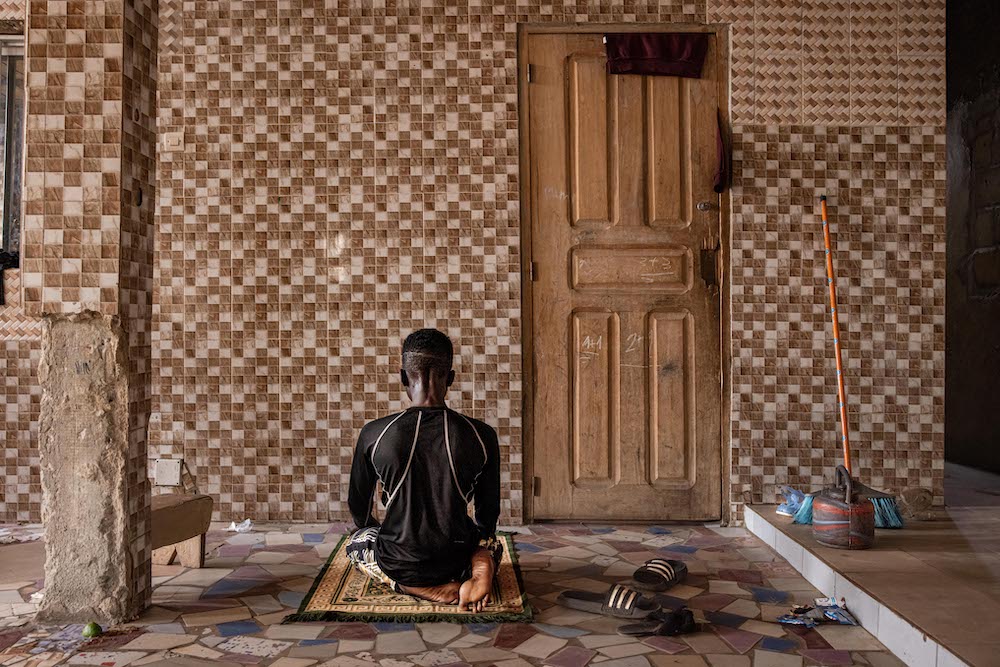 Fallou says his prayers on the morning of the Kirene Grand Prix. He is very pious, and performs the 5 daily canonical prayers. His training as a sportsman as well as his daily life are punctuated by religious rituals to which Fallou adheres in a very disciplined way: "Fallou Diop is very organised, very disciplined and meticulous. It is a set of qualities that we see in him in his daily actions, whether on foot or on horseback. "says Papa Seck, his first trainer. © Thomas Morel-Fort 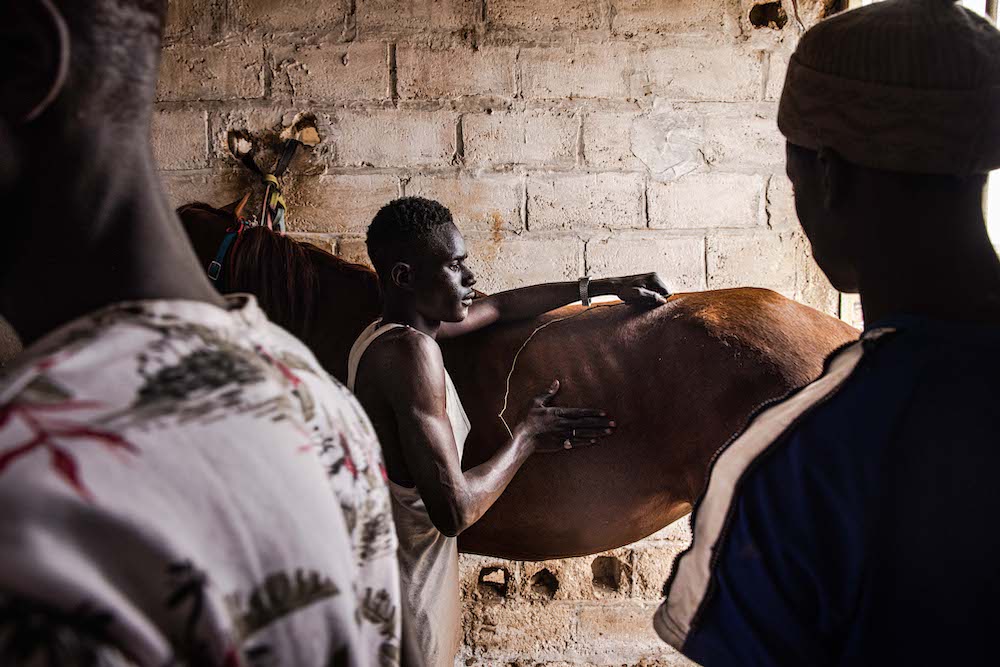 May 13th,2021. At Fallou's home. Today is a holiday. Senegal celebrates Eid al-Fitr, which marks the end of the Ramadan fast. The women of the family are busy preparing a big meal to which the neighbours, Fallou's friends, his trainers and the Harras' grooms will be invited. Fallou lives in the family home with his father, his two wives and his 15 brothers and sisters. The house is always full of neighbours, friends and admirers of Fallou. With the money from his victories Fallou has paid for the construction of an extra floor in the house and is already planning to build a second one. Horses have always been a part of Fallou's life. His father, MA SAMBA DIOP, 55, a farmer, was himself an amateur jockey and passed on to him the passion for horse racing. Fallou's older brother was also a jockey but after a sudden growth spurt he had to give up racing. © Thomas Morel-Fort 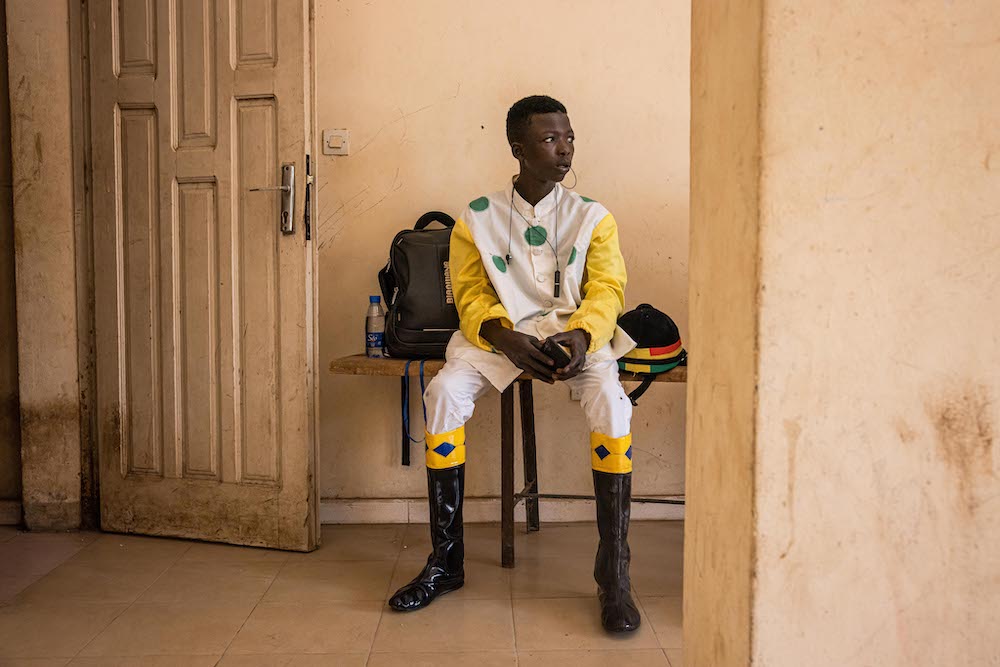 16 May 2021. Fallou in the locker room before the races. Grand Prix Kirene. This Sunday the event is organised by Mr Bao. He has invested several million CFA francs. Sponsored by one of the biggest brands of mineral water in Senegal, Kirene water. In the stands are the mayor of Thiès, the Minister of Livestock and the Minister of Sports. The event was broadcast live on the national television channel 2STV. Fallou Diop won the first two races of the Grand Prix Kirene. These two races of 1200 metres each carry a prize of 1 million CFA francs, the most important reward of this competition. The first race Fallou won with SAMBA COURA 2, who is a 7/8th thoroughbred. The second with LOUGA LO who is a ¾ of thoroughbred. At the end of the season the best jockey will be chosen. Fallou Diop has been named best jockey for the last 3 years of each season. © Thomas Morel-Fort 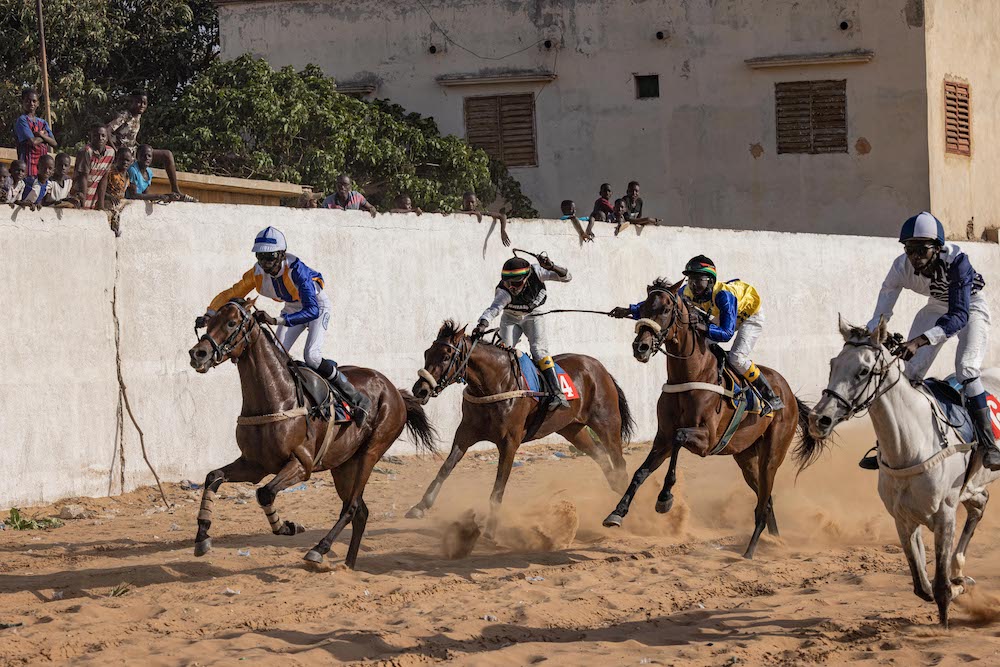 23 May 2021. Grand Prix of the National Assembly. Fallou is wearing blue and yellow. Fallou Diop wins the last one with EXPERT the favourite. EXPERT, a three-quarter thoroughbred, is one of the best horses in the Lambafar stable and is the pride of his owner. With Fallou on his back he has won every race he has competed in this season. © Thomas Morel-Fort 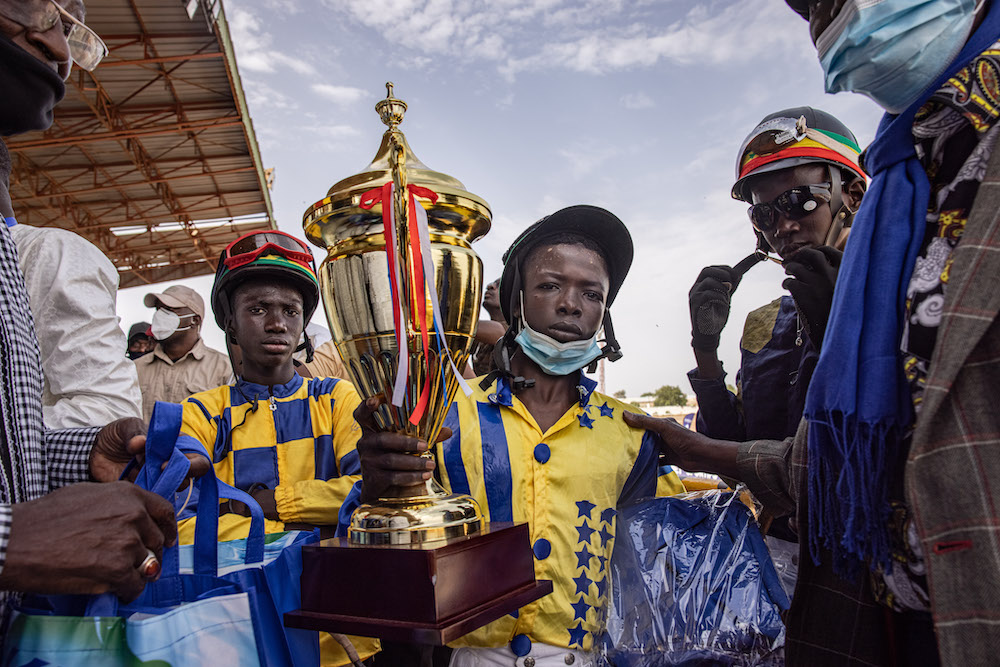 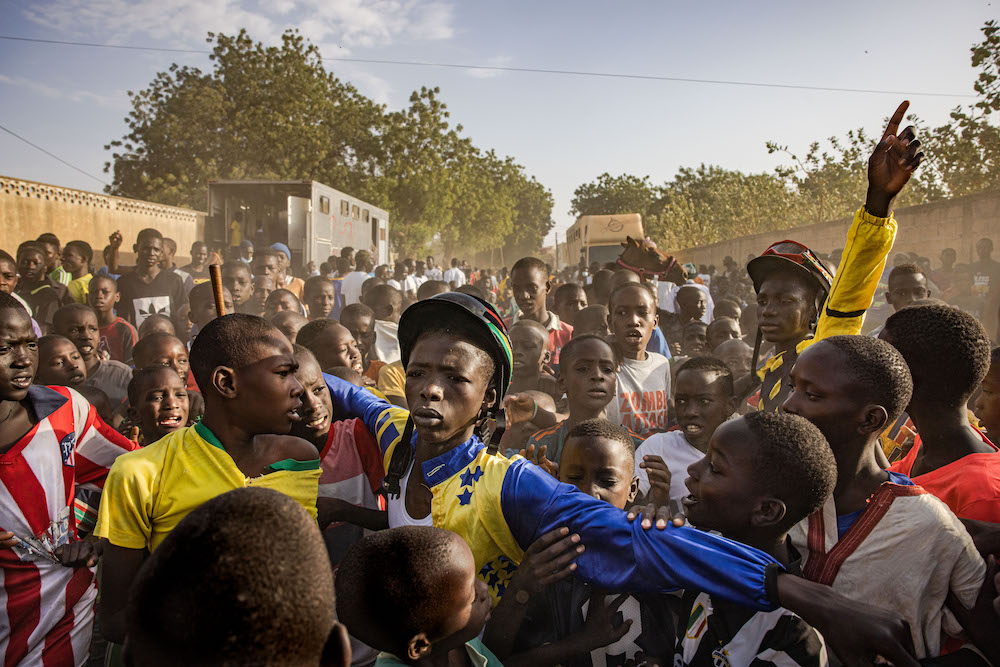 FALLOU and his fans: Fallou is a model for the youth. Every Sunday hundreds of children come to encourage their champion. Many of them dream of becoming jockeys, even if few of them will be able to do so because they lack the talent, weight or height required for this profession. After his victory, several hundred children throw themselves at Fallou as he leaves the racecourse. They shouted his name continuously and Fallou had to be accompanied by one of his trainers to make his way through the crowd to the lorry that would take him back to Niaga. The whole village is very proud. While Fallou shares the money from his victories with his family, he also shares his winnings with the villagers, pays for the schooling of his siblings and other children whose parents cannot afford to pay the school fees. © Thomas Morel-Fort

A freelance photographer since 2016, Thomas Morel-Fort works mainly on long-term documentary projects.
His work has been published in The Guardian , Der Spiegel , 6mois , Marie Claire International, Grazia, Le Parisien, L’express, L’Obs, Paris Match, La Croix, Le Figaro Magazine, Marianne, Le Monde, L’Equipe Magazine, Mediapart.
Before devoting himself to photography, he studied at the Institut National Supérieur des Arts du Spectacle (INSAS) in Brussels and at the Sorbonne (degree in philosophy) and the Sorbonne Nouvelle (degree in cinema). Between 2013 and 2016 he worked as an employee of Le Parisien to cover national news.
In 2015 he began his first long term project on Filipino domestic workers. For this investigation, he hired himself as a domestic worker alongside Donna, immersing himself for more than a month in the villa of a rich Libyan family on the French Riviera. The Camille Lepage Prize received at Visa in 2019 enabled him to travel to the Philippines to follow the families of the women he met in France.
In 2020, in collaboration with Axelle de Russé, with whom he founded LE HUBLOT (jazz musicians composing on photographs), he begins a work with a photographic camera on the world of culture.
While continuing to cover current events (Rohingya crisis, yellow waistcoat movement, conflict in Ukraine), he began a new long-term project on a girl suffering from a rare disease. Passionate about cinema and philosophy, in parallel to his work as a journalist, he is developing a work questioning voyeurism. His Night Sport series has been exhibited in Los Angeles and Brian Paul Clamp says: “Morel-Fort’s handsomely stylized images of individuals engaged in athletics in urban nighttime set tings are a world away from what one envisions when considering traditional sports photography. Quiet, still, and mysterious-these dramatic photographs have more in common with surveillance imagery.”
In 2022, he won the 1st prize in the Sport Story category with a reportage on Fallou Diop, a young Senegalese jockey, at the POYI (PICTURE OF THE YEAR INTERNATIONAL) and 2nd prize in the Sport Story category at the ISTANBUL PHOTO AWARDS

2018
PHOTOGRAPHIES OF THE YEAR AWARD APPF / Winner – Humanist for its coverage of the Rohingya refugee crisis.